Does the Pure One Have Need of Purification? 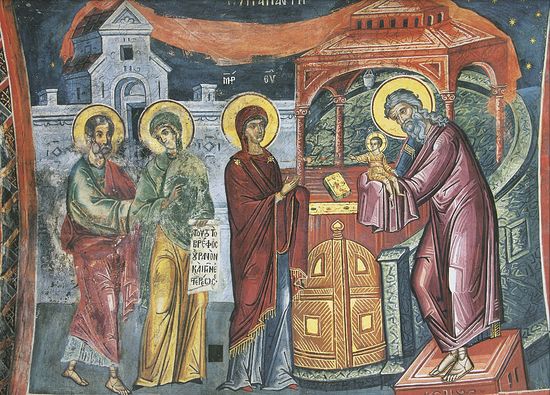 The original Greek of Luke 2:22 reads:

The King James Version translates this verse as follows:

"And when the days of her purification according to the law of Moses were accomplished, they brought him to Jerusalem, to present him to the Lord;..."

We see here that the KJV erroneously translates this verse to read "days of her purification". However, a puristic translation of the text would be translated as "days of their purification".

It is well known that the KJV makes these "errors" often whenever references to doctrines about Mary are conveyed in the Gospels, but this is one of those verses that if mistranslated has tremendous implications; the Theotokos has no need of purification. Rather this passage refers to the Jews and what the Law of Moses prescribed for them.

The Venerable Bede commenting on this passage writes:

"The firstborn of all the male sex was to be called holy to the Lord (Lev. 12:1-6). The Virgin did not receive seed, but even as our Lord willed to be under the Law, so that He might redeem us (Gal. 4:4-5), so too did the blessed Mother, who by a singular privilege was above the Law; nevertheless, she did not shun being made subject to the principles of the Law for the sake of showing us an example of humility" (Homily on the Feast of the Purification). The Song of Simeon, the Presentation of Christ, and the Greek Old Testament
Gabe Martini

The Song of Simeon, the Presentation of Christ, and the Greek Old Testament
Gabe Martini
The Nunc dimittis or Song of Simeon is a recorded response as this old, frail servant of the Lord beholds the incarnate Lord of Glory for the very first time. In this moment, he knew his life was complete; he had fulfilled his purpose. Interestingly enough, there is a significant back-story to this presentation of Christ, and to the elder Simeon’s response.

The Meeting of Our Lord
Archbishop Dmitri (Royster)
God literally entered the world, into time and history. He was physically present in the midst of His people, His creatures whom He loves. Our Lord took on human nature in order to reconcile unto Himself, man who had strayed far from the Source of his life.