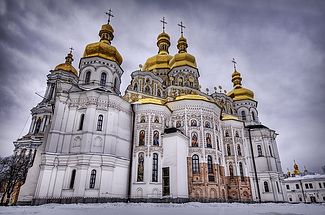 The statement of the All-Ukrainian Council of Churches regarding the threat of separatism has been published on the official website of the Ukrainian Orthodox Church of the Patriarchate of Moscow. It says:

The All-Ukrainian Council of Churches and Religious Organizations strongly condemns any discussion concerning a possible separation of our motherland and any attempts of separatism, which poses a threat to the unity and the territorial integrity of the Ukraine.

The territorial integrity of the Ukraine, the independence of which was given to us by God, is of a great importance for our people and that's why we do not have a right to allow its separation, as it is a sin against God and the future generations of our people.

In the present environment of the social and political tension, any discussion on this subject is dangerous, does not make for reconciliation, and leads to escalation of the conflict, spreading it to the regions. We also condemn the provocation of confrontations and hostility among residents of various regions of the Ukraine, representatives of different national minorities and faiths.

We address the residents of all regions of the Ukraine with words of a kobza player [a collective name for Ukrainian folk singers who played an Ukrainian traditional musical instrument resembling the guitar, which flourished in the 19th century]: “Embrace, my brothers! I implore and beseech you.”

Metropolitan of Boryspil and Brovary

Chancelor of the Ukrainian Orthodox Church Ukraine: It’s not about Europe vs Russia
To discuss the Ukrainian crisis in terms of a choice between Europe and Russia is misleading for several reasons. Kiev Caves Lavra praying for repose of the deceased and reconciliation of opposing parties
February 20 was announced a day of national mourning in the Ukraine for with the human victims, resulting from the mass disorders in the country. Metropolitan Anthony of Boryspil and Brovary: "We must exert every effort for maintenance of peace in the country"
On January 21, 2014, on Grushevsky Street in the center of Kiev, where the confrontation between participants of the rally and the law-enforcement agencies has taken place for two days, several monks of the Ukrainian Orthodox Church stopped the power actions of the sides and called for reconciliation. The chancellor of the Ukrainian Orthodox Church Metropolitan Anthony of Boryspil and Brovary has commented upon this situation.
Comments
×