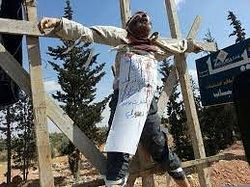 Eight rebel fighters have been crucified in Syria by the Islamic State in Iraq and the Levant (ISIL) because they were considered too moderate, a monitoring group said on Sunday.

The Syrian Observatory for Human Rights, which relies on contacts on the ground in Syria, said the men were crucified on Saturday in Aleppo province. It added that their corpses were still on view.

The Observatory said clashes between rival Islamist groups in Syria had killed around 7,000 people since January, as militants from ISIL try to strengthen their grip on territory.

The infighting has complicated the insurgency and drawn in foreign fighters.

ISIL, a radical al Qaeda offshoot group, has captured areas on both sides of the Iraqi-Syrian border after seizing the Iraqi city of Mosul on June 10 and sweeping towards Baghdad.

In Syria, ISIL has battled with groups such as the Nusra Front, al Qaeda's official Syrian wing, in the uprising against President Bashar al-Assad which started with pro-democracy protests but has descended into civil war.

The Observatory, an anti-Assad group which tracks the violence, said the vast majority were killed in explosions, including car bombings and suicide attacks. It monitored the infighting in seven provinces.

It said ISIL had executed the eight men in Aleppo province for belonging to more moderate groups. The men were crucified in the town square of Deir Hafer in eastern Aleppo and would be left there for three days, it said.

The men were accused of being "Sahwa" fighters, the Observatory said, a term ISIL uses to refer to rival combatants whom it accuses of being controlled by Western powers.

ISIL also crucified another man in the province in al-Bab town near the Turkish border, it said. He was pinned up for eight hours as a punishment for giving false testimony but survived the ordeal, the Observatory said.

ISIL, a rebranding of al Qaeda in Iraq which fought American forces during the U.S. occupation, has been disowned by the al Qaeda leadership, partly because of its brutality and indiscriminate attacks.

The group has alienated many civilians and opposition activists by imposing harsh rulings against dissent, even beheading its opponents, in areas it controls.

The military gains by ISIL have highlighted how the conflict in Iraq is intertwined with the civil war in Syria, where more than 160,000 people have been killed.

On Saturday, Islamist rebels fought back in Syria's border town of Albu Kamal, challenging the hold of ISIL.

ISIL fighters had appeared to be consolidating their hold over Albu Kamal during the week when the local leader of the rival Nusra Front pledged allegiance to them.