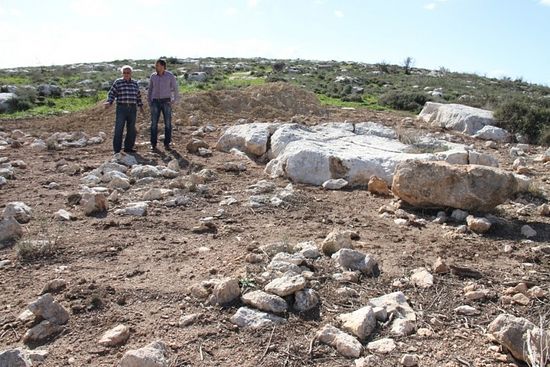 The administration of an Israeli kibbutz in Ahihud has once again descended to desecrating a sacred site: according to its recent decision a local Christian cemetery will be used to build cattle pens, reports the Salam1 portal.

This week the administration of the Ahihud kibbutz, established on the site of the al-Barva village east of the town of Acre (Akko), decided to start building new cattle pens on land belonging to a Christian cemetery adjacent to the farming enterprise. The earth needed for building work was transported to the cemetery the very next day.

The above decision of the Ahihud directors has led to widespread reactions in both the Israeli and Palestinian communities.

For example, the al-Aqsa foundation, which is specialized in protecting the country’s cultural heritage, has expressed its concern at the actions of the kibbutz leadership. In an interview with journalists on Thursday February 5, a member of staff at the department for the protection of national shrines (al-Aqsa) Abdulmajid Igbariya noted that “this event can only be regarded as a violation of the holy peace of the deceased.”

“I was there on Wednesday and saw a heap of earth right on the cemetery… It should be noted that this is not the first such incident in the history of Ahihud: more than one cattle pen has been built literally on the bones of deceased Christians and Muslims. This is outrageous! It is unacceptable from the point of view of both ethics and law,” said Igbariya.

In his turn, the human rights activist Karayim Sakas who accompanied the al-Aqsa delegation has stressed that “we must use every possible leverage over Ahihud to prevent desecration.”

“Christians in neighboring villages will not permit another act of vandalism, the desecration of the memory of deceased ancestors. To do this, all of us, together with al-Aqsa, are collectively appealing to the law enforcement agencies and the civil court to complain about the actions of the kibbutz administration. We hope that not only will the appropriate agencies stop the desecrators but will also obligate them to restore the cemetery’s original appearance and dignity,” said Sakas in conclusion. An Orthodox church robbed in Haifa (+Photo)
Attacks on Christian houses of worship in the Holy Land are continuing.