Crowned, anointed, and communed as clergy: On the coronations of Russian empresses regnant

It is well-known that in May 1896, at the last coronation of a Russian monarch and his consort, Emperor Nicholas II and Empress Alexandra Feodorovna were both crowned and anointed by the Russian Orthodox Church’s senior-ranking metropolitan. Russian tsars had been crowned from time immemorial, but what is fascinating about this last coronation ceremony was that many of the time-honored rituals Nicholas II participated in as the monarch were rituals first observed in 1730 at the coronation of a female sovereign, Empress Anna Ivanovna. 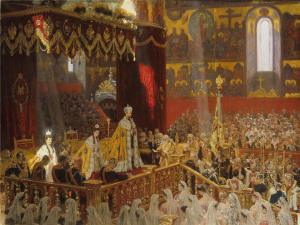 Keeping with imperial precedent dating (according to Brenda Meehan-Waters’ 1975 essay “Catherine the Great and the Problem of Female Rule”) to Elizabeth Petrovna’s 1742 coronation, the sovereign Emperor Nicholas crowned himself, symbolizing that the autocratic power devolved to him directly from God and not from the blessing of the Church. In contrast, Empress Alexandra, as the consort and not the sovereign in her own right, was crowned directly by her husband, who briefly took off his own imperial crown, touching it to her forehead before crowning her with the smaller consort’s imperial crown. This act of the physical crowning of the Russian empress consort by her sovereign spouse closely follows Byzantine custom for the crowning of the Augusta/Βασίλισσα (see Wooley, Maxwell, B.D. Coronation Rites. Cambridge University Press, 1915), and has its first example in Russian history with Peter I’s 1724 coronation of his consort Catherine, who ultimately succeeded him as sovereign (r. 1725-27). Catherine I does not seem to have had a coronation as Empress regnant, but at her coronation as consort in 1724 she received the pomazanie, the anointing with holy chrism, following her crowning by Peter. 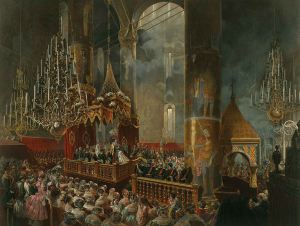 To emphasize Nicholas’ role as monarch, in which he fulfilled a quasi-sacerdotal role as intercessor for his people before God, in keeping with his male and female predecessors the Emperor was anointed during the Divine Liturgy at the Royal Doors/Beautiful Gate by Russia’s senior-most Metropolitan. Mirroring the anointing performed at one’s chrismation, the monarch was sealed with the gift of the Holy Spirit in the eight holy places — on his forehead, his eyes, his ears, his nose, his mouth, his breast, his hands, and his feet. Reflecting that she was not the sovereign in her own right, but her husband’s help-meet and consort sharing equally in his imperial dignity and the ultimate spiritual responsibility for governing the empire, Empress Alexandra too was anointed by the metropolitan, but only once, upon her forehead.

The key distinction between the monarch and his consort came not even at the anointing, which was performed immediately before the Holy Gifts were administered, but in the reception of communion itself. Emperor Nicholas II, as the monarch — not, as it has been argued, due to his maleness — received the Lord’s Body and Blood directly in the altar itself. He communed directly of the Body and Blood as if he were a priest or a bishop, using his hands to take the bread and the chalice, symbolizing his spiritual equality among Russia’s senior bishops and metropolitans just this once in his life. Thus, for all intents and purposes, during the Divine Liturgy on this one occasion the monarch was regarded by the Church as a mixed person, set apart as part-priest and part-layman. In contrast, the Empress Alexandra, as the imperial consort and therefore not a “mixed person”, but nonetheless exalted over all other lay people, was the first of the laity to receive communion, but she received on the solea as did the laity, and from the chalice via the spoon, with the Body and Blood mixed together in the lay manner. 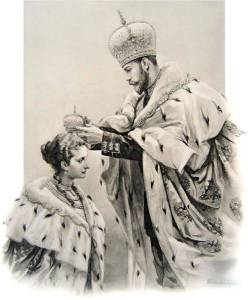 Nicholas II crowned Alexandra as Empress consort immediately following his own coronation. He took off his Imperial crown and touched it briefly to her forehead, symbolizing her sharing in his sacred duty of ruling Russia, and then proceeded to crown her with the smaller consort’s crown.
Brenda Meehan-Waters’ superb essay “Catherine the Great and the Problem of Female Rule” reveals remarkable evidence that, prior to Emperor Paul changing the Russian imperial succession laws in 1797, three of Russia’s four empresses regnant communed of the Body and Blood exactly as reigning emperors did. Meehan-Waters confirms Robert Massie’s unsourced and uncited claim in his Catherine the Great: Portrait of a Woman(2011) that Catherine II would have received communion in the clerical manner in the altar of the Kremlin’s Uspenskiy Sobor, as well as gone into the altar area to be anointed immediately before receiving the sacrament. What neither Meehan-Waters or Massie observe is whether or not empresses regnant were anointed simply on the forehead, as later empresses consort were due to their sex, or, more likely, as reigning sovereigns, they were likely anointed as male monarchs were, on the eight holy spots consecrated with the holy myrrh during chrismation.

Meehan-Waters writes that, beginning with Anna Ivanovna in 1730, all Russian empresses regnant took communion in the priestly manner, performing a fundamentally male sacerdotal role — or, rather, showing that the Orthodox Church did not understand the sacerdotal role performed by the monarch at his or her coronation as an intrinsically or necessarily male one. This is extraordinary. Considering that Catherine I’s coronation as consort in 1724 marked the first time in history the Russian Orthodox Church had officially blessed and sanctified any coronation of a woman — we have no evidence that Orthodox Muscovite tsaritsas were ever crowned along with their husbands or in separate ceremonies — it is all the more remarkable that, only six years later, the Church was not only blessing a second woman as Empress regnant of Russia, but was allowing her to take communion as if she were part of the clergy, and to receive the holy anointing in the altar itself. 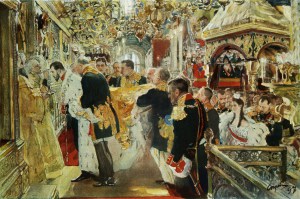 The anointing of Nicholas II, May 1896, Uspenskiy Sobor, with Empress Alexandra waiting behind him for her own anointing.
For her evidence of this great claim, Meehan-Waters cites V.I. Zhmakin’s “Koronatsii russkikh imperatorov i imperatrits 1724-1856 gg.”, (“Coronations of Russian emperors and empresses”, chronicling from Catherine I to Nicholas I), which appeared in Russkaia Starina issue 37, 1883, page 500, 517, and 522.

The political and theological implications for this are huge. By taking the Body of Christ in their own hands and putting it into their own mouth, and then drinking directly from the chalice containing the Blood, the three Russian empresses regnant who did this — Anna, Elizabeth, and Catherine II — did something that no male emperors before them had done, and no empress consorts after them would ever do. By communing as if they were priests or bishops, these empresses regnant assumed unto themselves a fundamentally male role that, strictly speaking, was utterly without solid Christian theological justification. For all intents and purposes, at Anna, Elizabeth, and Catherine II’s coronations, the Church treated these sovereign women as if they were mixed persons, part God-ordained and God-consecrated lay woman, and, astonishingly, somehow, as part priest. 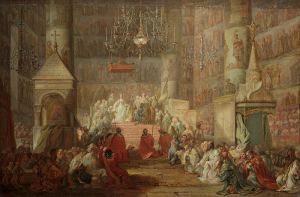 Stefano Torelli's 1777 portrait of the coronation of Catherine II, Tretiakov Gallery.
This practice of empresses regnant communing as if they were male clergymen is without firm Christian theological foundation, yet Meehan-Waters provides no evidence that any layman or member of the clergy present in the Uspenskiy Sobor objected to, or attempted to correct or stop Empress Anna or her two female successors from doing this. Instead, we have only silence, and thus, we can assume, either quiet approval or at least benign tolerance of this one woman, the female sovereign, communing as if she were a priest. The metropolitans who communed these women did not, strictly speaking, have to do so, but they did, and left no objection to history.

Here is the text in question from Meegan-Waters, from page 305-306 (bold emphasis mine):

Religious ritual, particularly the coronation ceremony, exalted the image of the autocrat. The Russian imperial coronation rite evolved during the eighteenth century, reflecting so many other aspects of Russian life introduced by Peter the Great. The Petrine imperial coronation ceremony was first performed in 1723 for the crowning of Peter’s second wife Catherine. It differed from the pre-Petrine ceremony, also based on the imperial Byzantine form, in its diminution of the role of the Church and exaltation of the autocrat. Christian coronation ceremonies usually include symbolic reminders of the priestly function of the ruler. Thus the coronation of a woman presents a problem, since she is ineligible for priesthood. However, the coronation of the Empress Anna in 1730 set important precedents in the religious symbols of the ceremony. Empress Anna was the first Russian sovereign to walk up into the holy altar — the altar set aside for the clergy — for her anointing. She was also the first monarch to take holy communion according of the rite of the clergy rather than the laity. In 1742 Empress Elizabeth followed these precedents while starting an important one of her own. She was the first Russian ruler to place the crown and the imperial mantle on herself, without the assistance and symbolic approval of the metropolitan. Catherine the Great followed the same ceremonial order, which became in the nineteenth century the fixed ritual for the Russian coronation rite. Thus the imperial coronation ceremony, which evolved during the eighteenth century and symbolically attested to the increased power of the ruler, had its origins in ceremonies designed to glorify Russia’s female rulers. 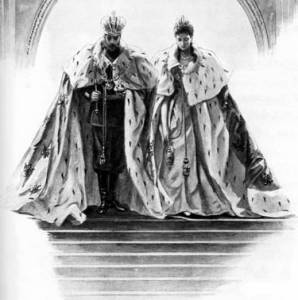 Partners in holy and royal matrimony and equal bearers of the burden of imperial role, Emperor Nicholas II and Empress Alexandra sketched as they leave the Uspenskiy Sobor in full regalia following their coronation and anointing.

Orthodox in the District

Consorting with the kings and tsars for nearly a millennium
Official diplomatic ties have existed between Denmark and Russia for over 520 years, but their shared history goes back much further than that. 400 years since coronation of the first Romanov

400 years since coronation of the first Romanov
The 400th anniversary of the Romanov dynasty is marked on the 6th of March. Michael Romanov, whose grandfather, Nikita, wa a central adviser to Ivan the Terrible, was unanimously elected Tsar of Russia by a national assembly on 21 February 1613. Since that time, Romanov family, as the second and last Russian imperial dynasty, ruled the country right until 1917. The February Revolution resulted in abdication of Nicholas II in favor of his brother Grand Duke Michael Alexandrovich. The latter declined to accept the crown, terminating the Romanov dynasty's rule over Russia.