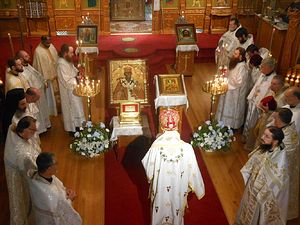 The feast day saw its biggest crowd in recent years—more than a hundred pilgrims made the journey to America’s oldest Orthodox monastery to celebrate the memory of the great eighteenth century Russian hierarch. The choir consisted of St. Tikhon’s monastics, seminarians, graduates, and members of the broader community under the direction of Musical Director Benedict Sheehan.

In his homily Archbishop Mark remembered St. Tikhon of Zadonsk as someone who “was not only known for his teaching and his writings, and teaching at the seminary and establishing seminaries, but as a person who lived what he preached. It was a part of who he was.” Encouraging the faithful to cultivate a living faith, he concluded: “as we accept the salvation that God earnestly desires us to have, let’s follow the examples of the saints that have gone before us, like St. Tikhon of Zadonsk—that we not only teach the faith by our words, but we teach by our actions. And let us make sure we make every attempt to teach by our actions before our words.” 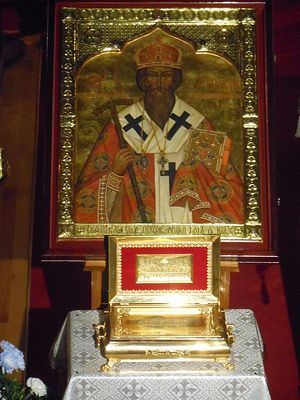 St. Tikhon’s Monastery is the first Orthodox monastery established in the United States, founded in 1905 by the Patriarch St. Tikhon during his years as a missionary in America, and named in honor of his heavenly patron, St. Tikhon of Zadonsk. In 1938 St. Tikhon’s Seminary was also opened on the land purchased by St. Tikhon.

A photo gallery of the Vigil and Divine Liturgy can be viewed on the monastery's website. “Amidst This Wonderful Nature, Even a Long Road Seemed to be Short”
Founders Day of St. Tikhon’s Monastery, October 2014

“Amidst This Wonderful Nature, Even a Long Road Seemed to be Short”
Founders Day of St. Tikhon’s Monastery, October 2014
Like St. Tikhon at the founding of this Holy Monastery, we too live in turbulent times. But this place, this sacred place where Saints have walked, has been an image of stability and a rock of faith, just as its founders were.