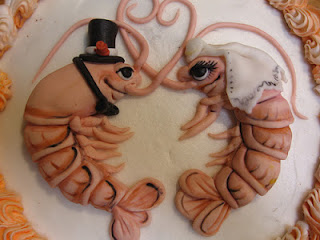 As these texts are translated by the King James Version, and in several other translations, you do find the same word ("abomination") is used, but in the Hebrew text you find two different words:

Leviticus 18:22 reads: Thou shalt not lie with a man, as with a woman: it is abomination [tô‛êbah].

These two words, while they have some overlap in terms of their range of meaning, do not have the same range of meaning. The NRSV translates "sheqets" as "detestable," which at least alerts the reader to the fact that the words are not identical. According to the Theological Wordbook of the Old Testament, the word "sheqets" is used "mostly in reference to unclean and forbidden foods ... Relegating certain animals to the category of "unclean" and "abominable" may in a number of instances involve considerations of health. Yet the main consideration here must be that, whatever the reason, or however much or little it was understandable to the Israelites, certain foods were forbidden and regarded as detested. This was to be accepted on the simple basis of trust in, and obedience to God" (Vol. II, ed. R. Laird Harris, et al. (Chicago: Moody Press, 1980), p. 955).

While "tô‛êbah" can refer to that which is ritually offensive, it also includes matters that are morally repugnant, such as homosexuality (Leviticus 18:22), human sacrifice (Deuteronomy 12:31), ritual prostitution (1 Kings 14:23f), etc. "Whereas tô‛êbah includes that which is aesthetically and morally repulsive, its synonym sheqets denotes that which is cultically [i,e, ritually] unclean..." (Ibid., p. 977).

In the case of eating shrimp vs. homosexual sex, you can tell a lot about the degree to which these things were regarded as sinful by the punishments meted out to those who violated them. In the case of eating shrimp, there was no specified punishment at all. The person who shrimp would have certainly been considered unclean for some period of time, pending ritual purification. According to Jewish tradition, they might also have been subject to corporal punishment. The punishment for engaging in homosexual sex was death (Leviticus 20:13).

We can also tell that these things are viewed very differently by the fact that only Israelites were expected to abstain from non-kosher food. On the other hand, the passage that the ban against homosexual sex is listed (in Leviticus 18) is in the context of a list of sexual sins for which God judges even the gentiles. This is stated before this list, and repeated again at the end of it:

Defile not ye yourselves in any of these things: for in all these the nations are defiled which I cast out before you: and the land is defiled: therefore I do visit the iniquity thereof upon it, and the land itself vomiteth out her inhabitants. Ye shall therefore keep my statutes and my judgments, and shall not commit any of these abominations [tô‛êbah]; neither any of your own nation, nor any stranger that sojourneth among you: (For all these abominations [tô‛êbah] have the men of the land done, which were before you, and the land is defiled;) That the land spew not you out also, when ye defile it, as it spewed out the nations that were before you. For whosoever shall commit any of these abominations [tô‛êbah], even the souls that commit them shall be cut off from among their people. Therefore shall ye keep mine ordinance, that ye commit not any one of these abominable [tô‛êbah] customs, which were committed before you, and that ye defile not yourselves therein: I am the Lord your God (Leviticus 18:24-30).

There was no mention that non-kosher foods were forbidden before the Law of Moses. For example, God said to Noah: Every moving thing that liveth shall be meat for you; even as the green herb have I given you all things (Genesis 9:3). And when Gentiles began entering the Church, the Apostles declared that the Gentiles were not bound by the kosher laws of the Mosaic Law:

For it seemed good to the Holy Ghost, and to us, to lay upon you no greater burden than these necessary things; that ye abstain from meats offered to idols, and from blood, and from things strangled, and from fornication: from which if ye keep yourselves, ye shall do well. Fare ye well (Acts 15:28-29).

And it should be noted that the word translated as "fornication" is the Greek word "porneia," which includes any kind of sexual immorality, including those listed in Leviticus 18. This also completely ignores the vision given to St. Peter which specifically ended the requirement for Christians to abstain from non-kosher food (Acts 10:9-16), and that there are several other New Testament passages that condemn homosexuality. So the argument that Christians are hypocritical in their appeal to the ban on homosexual sex in in Leviticus 18:22, which still each shrimp, lobster, clams, and crawfish is completely consistent with testimony of Scripture.

A recent example of pro-homosexuals trying to argue against taking seriously Leviticus 18:22 by appealing to the biblical illiteracy of the average American is the following clip from the TV show "West Wing," which "Occupy Democrats" have been circulating via social media recently, which even resulted in CNN's Don Lemon playing portions of it:


(the pertinent part of this clip begins at about 1:18)

This line of argument is really not just against the Church's position on homosexuality. It is also an argument against taking the Bible seriously at all. No one who considers himself a Christian should have any sympathy for such arguments. But we should know how to respond to them, and so let's look at the passages referenced in this video:

Exodus 21:7-11: This passage provides some special protections for female slaves, because they obviously were in a more vulnerable position. For more on this question, see "Stump the Priest: What about Slavery in the Bible?", but suffice it to say here that this passage does not command that anyone own slaves, nor that anyone sell their children into slavery—it puts limits on how slaves could be treated. This was quite in contrast with Roman law, for example, in which a master could do whatever he wished to a slave, up to and including killing them, for any reason.

Slavery is no where in the Bible presented as a good thing. A Christian can certainly not own slaves and oppose most forms of slavery without violating any tenet of Scripture or Church Tradition (we still allow for involuntary servitude as a punishment for a crime, and in the form of the military draft). And so the comparison of this issue to the question of whether or not homosexual sex is a sin is a ref herring.

Exodus 35:2: This passage calls for the death penalty for those who break the Sabbath. The Church still believes that the Ten Commandments, including the commandment to remember the Sabbath day, apply to Christians, but we consider the Lord's day (Sunday) to have taken the place of the old Sabbath as the primary day of Christian rest and worship, though we also continue to observe Saturday the day of creation. The Church does not call for the death penalty for violating this, nor does it call for it in the case of homosexuality. For more on this, you can listen to the sermon: The 4th Commandment: Remember the Sabbath day to keep it holy.

The Old Covenant was given to people who were at a very low level of spiritual understanding. The harsh penalties that are often found in the Old Testament law were due to this. St. John Chrysostom, commenting on the law which condemned Sabbath breakers to death, said that it was "Because if the laws were to be despised even at the beginning, of course they would scarcely be observed afterwards" (Homilies on the Gospel of Matthew 39:3). But while the harsh and immediate penalties for the violation of the law are relaxed in the New Testament, the strictness of the laws themselves are not only not relaxed, but are rather enhanced. Just as you spank younger children, but expect less of them, and expect more of older children, without spanking them, the Old Testament dealt with the Israelites where they were, but brought them gradually to a higher level of spiritual understanding.

Then Martin Sheen's character simply begins to make stuff up. He speaks of the Bible calling for stoning someone who plants different seeds together, and burning to death someone who mixes different kinds of fabrics. While Leviticus 19:19 does say: Ye shall keep my statutes. Thou shalt not let thy cattle breed with a diverse kind: thou shalt not sow thy field with mingled seed: neither shall a garment mingled of linen and woollen come upon thee, you will note that it says nothing about anyone being stoned or burned alive for failure to observe these customs. This shows the complete dishonesty of those who make such arguments. These customs were part of the ceremonial law of Moses (which still has symbolic value, but which is no longer directly applies in the New Testament), not the moral law of God—which was in effect before the law of Moses, and remains in full force and effect today. See: The Continuing Validity of the Moral Law of the Old Testament.

For more information on the Levitical Law and homosexuality , see:

"Dan Savage Savages the Bible, Christianity, and the Pope," by Dr. Michael Brown

As well as the following video from Dr. Robert Gagnon: Churches embracing homosexuality prepare members to accept the Anti-Christ: Russian Orthodox leader
“These are not Christian communities anymore. This is another community with its own distinct name of 'LGBT.' Its future is simple and clear – the 'fire of Gehenna' – this is just what the Holy Scripture says,” Fr. Smirnov said. Why is the Orthodox Church Against Homosexuality?
Hieromonk Job (Gumerov)

Why is the Orthodox Church Against Homosexuality?
Hieromonk Job (Gumerov)
Holy Scripture calls any violation of Divine law a sin (see. 1 Jn. 3:4). The Lord and Creator bestowed particular emotional and physical qualities upon man and woman so that they would complete each other and thus make a unity. The Holy Bible witnesses that marriage, as a constant, lifetime union between a man and a woman, was instituted by God at the very onset of human existence.
Comments

Trevor Mobbs5/15/2019 9:35 am
Very much a case of arguing from the conclusion. You say that tô‛êbah covers 2 different categories of things because... you’ve already decided that it does.

A proper argument would be to identify all of the things that tô‛êbah is used to refer to and then examine what those things have in common, as this would help demonstrate the meaning of the word. Instead, you’ve started with 2 predetermined categories and used that to declare that the word has 2 meanings.
×