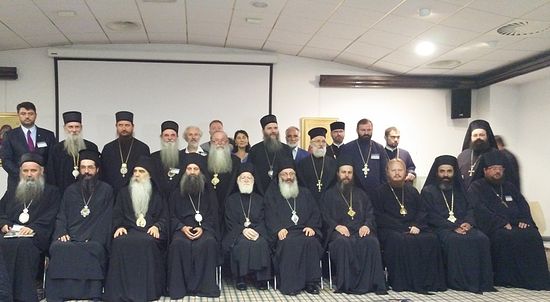 On September 20, the 8th meeting of the Inter-Orthodox Network of Centers for Study of Modern Religions and Destructive Movements completed its work in Slovenia.

They made a special statement expressing concern for the persecution of the canonical Ukrainian Orthodox Church:

“The participants in the 8th meeting of the Inter-Orthodox Network for Study of Religions and Destructive Cults take with a heavy heart the tragic events going on in the east of Ukraine. We, representatives of Local Orthodox Churches, pray that the fratricidal war that has already taken thousands of lives may be stopped as soon as possible.

At the same time, we are concerned for the persecution to which the canonical Ukrainian Orthodox Church is subjected.

We believe it unacceptable and inadmissible that the Ukrainian mass media should disseminate provocative stories about the Ukrainian Orthodox Church, aimed at discrimination on religious grounds, which results in cases of violence against the UOC clergy and laity, as well as acts of vandalism towards holy places. Thus, the tension in Ukrainian society is growing even higher.

The participants in the conference resolutely condemn the capture of Orthodox churches perpetrated by followers of the schismatic group the ‘Kiev Patriarchate’.

We express support for His Beatitude Metropolitan Onufry of Kiev and All Ukraine and all the faithful of the Ukrainian Orthodox Church. We call the Ukrainian people, especially the parties of the conflict, to a speedy reconciliation and restoration of peace commanded to us by Christ.

The city of Otocec, Republic of Slovenia.”