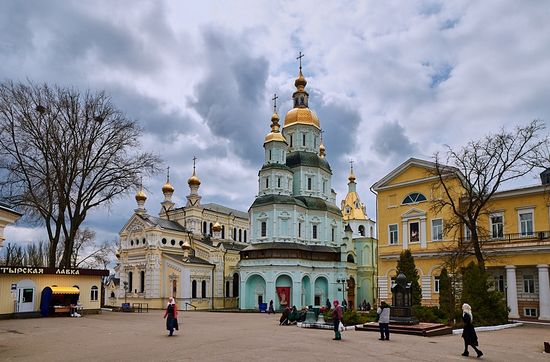 Five bottles with flammable liquid were found near the walls of the Protection Monastery in the Ukrainian city of Kharkov.

A church guard walking the area found garbage bags buried in the ground with "Molotov cocktails" inside. The police were called, the Ukrainian Orthodox Church reports.

The officers believe that a terrorist act was prevented, staff member of the diocesan administration Fr. Dionisy Zaloga stated.

"Flammable liquid was found within five-seven meters from the monastery wall. There are diocesan and monastery buildings, and the oldest cathedral in Kharkov, of the Protetction, behind them. It shows that unidentified people are ready to commit arson against church buildings at any time," the message reads. V. Legoida on the recent events in Kiev: “The arson of church is a step towards new divisions”

V. Legoida on the recent events in Kiev: “The arson of church is a step towards new divisions”
“Frighteningly often we receive reports on shelling, arsons and destruction of churches of the canonical Ukrainian Orthodox Church,” the Synodal Information Department’s chairman noted. Arson of a church in Chernigov region of the Ukraine

Arson of a church in Chernigov region of the Ukraine
A piece of a rag and some liquid poured over the ground were found at the scene.
Comments
×