Meeting of the Synod of the Ukrainian Orthodox Church 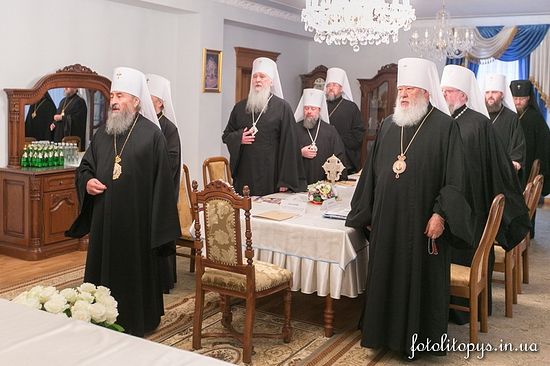 On October 27, 2015, the Synod of the Ukrainian Orthodox Church held its regular session in Kiev, chaired by His Beatitude Onufry, Metropolitan of Kiev and All Ukraine.

In connection with the developments in Ukrainian society the Synod drafted a message to the faithful of the Ukrainian Orthodox Church.

The message states that "the Ukrainian Orthodox Church, together with all the Ukrainian people, is seeking a path to national reconciliation." The Synod welcomed the ongoing truce and expressed hope that it "will grow into a real lasting peace."

The message points to positive changes made to Ukrainian legislation concerning some problems of state-church relations. At the same time, it points out violations of the rights of the faithful in some regions of the country, such as seizure of churches of the Ukrainian Orthodox Church, violation against the faithful and attempts on their lives. The Holy Synod stated once again that "some local authorities have allowed violations of the effective national legislation while law-enforcement bodies have not always defended the legitimate rights of religious communities, clergy and laity of the Ukrainian Orthodox Church." According to the Synod, "it does not only impede the realization of the constitutional right of Ukrainian citizens to free confession of their faith but also provokes social tension in our state. At a time when an extremely difficult peace process is going on in Donbass, we actually face a danger of destabilization of the social situation in Ukraine’s other regions."

The message makes special mention of the role played by the Synodal Legal Department and the Department for External Church Relations in opposing such violations of the legislation and in timely reporting them to international human rights organizations.

The Synod called upon the faithful to not give into provocations and confrontation on religious grounds. "Our main tool in this spiritual struggle is the real Christian love of our neighbor. Our Lord Jesus Christ calls us: love your enemies and pray for those who persecute you, that you may be children of your Father in heaven (Mt. 5:44-45). Any animosity between people is overcome by love. If the Lord sends us trials, it means He cares for our perfection; He gives us an opportunity to grow in the love of our neighbor. Make sure that nobody pays back wrong for wrong, but always strive to do what is good for each other and for everyone else (1 Thess. 5:15).

In its message, the Synod also expressed concern over "the situation developing around the preparations for the Pan-Orthodox Council." It appeals to all those who are involved in them "to do everything to preserve the rules, traditions and customs of the Holy Catholic Orthodox Church which lie in the foundation of our pan-Orthodox unity."

The Synod approved the decision to celebrate in the Ukrainian Orthodox Church in 2016 the centenary of the Old Russian monasticism on Holy Mount Athos.

Archimandrite Veniamin (Pogrebnoy), diocese of Poltava, was elected a vicar bishop of the Poltava diocese with the title of Bishop of Novye Sanzhary.

Archimandrite Sergiy (Mikhalenko) was elected a vicar bishop of the diocese of Odessa with the title of Bishop of Bolgrad.

The Synod made decisions on the glorification and veneration of certain saints and shrines of the Ukrainian Orthodox Church.

It also made a number of legal, personnel and disciplinary decisions concerning the internal life and order of synodal departments, dioceses, monasteries and educational institutions of the Ukrainian Orthodox Church. An “unwanted church”: Ternopil authorities levy taxes on only one church: the Orthodox
This openly provocative and illegal decision has been made by deputies of the Ternopil city council at the session on March 3, 2015, thus showing disregard for the Ukrainian legislation which defines the equal treatment of all religions by the government.
Comments
×