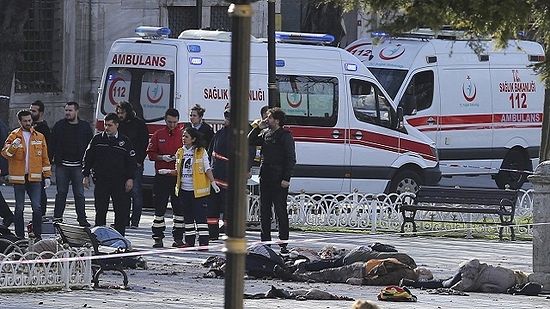 A powerful blast rocked the Sultanahmet neighborhood which is home to Istanbul’s biggest concentration of monuments and is visited by tens of thousands of tourists every day.

The Radio and Television Supreme Council (RTÜK) imposed a temporary media ban for the coverage of the explosion after the demand from the Prime Ministry, Zaman Today newspaper said.

Turkey is on edge after a series of deadly attacks blamed on the Islamic State (IS) jihadist group including a double suicide bombing in the capital Ankara in October that left 103 people dead.

“Terrorist links are suspected,” a Turkish official said of Tuesday’s blast, asking not to be named.

“Investigations into the cause of the explosion, the type of explosion and perpetrator or perpetrators are under way,” the Istanbul governor’s office said in a statement quoted by the Dogan news agency.

Media reports said the authorities were studying the possibility the blast was caused by a suicide bomber but there was no official confirmation.

The Doğan reported that at least six Germans, one Norwegian and one Peruvian are among those injured in the explosion. Seoul’s Foreign Ministry told reporters that one South Korean had a minor finger injury.

The explosion was powerful enough to be heard in adjacent neighborhoods, witnesses said. Police cordoned off the area to shocked passers-by and tourists and the nearby tram service has been halted.

“The explosion was so loud, the ground shook. there was a very heavy smell that burned my nose,” a German tourist named Caroline said.

“I started running away with my daughter. We went into a nearby building and stayed there for half an hour. It was really scary,” she added.

“The explosion was very loud. We shook a lot. We ran out and saw body parts,” one woman who works at a nearby antiques store told a Reuters correspondent, declining to give her name.

Media reports said the blast took place at 8.20 GMT around the Obelisk of Theodosius, a monument from ancient Egypt which was re-erected by the Roman Emperor Theodosius and is one of the city’s most eye-catching monuments.

Ambulances rushed to the site, which is close to the Blue Mosque and Hagia Sophia in Sultanahmet.

A large number of fire-fighting trucks, medical teams and bomb disposal teams were dispatched to the area, and a police helicopter was seen circling overhead at the site.

The wounded have been taken to Haseki Training and Research Hospital and nearby hospitals.

A police vehicle heading to the area where the explosion took place overturned near Sultanahmet tram station.

Police tightened security measures around the area and sealed off the central square after the blast, barring people from approaching the square in case of a second explosion.

“We’re taking precautions against a second explosion,” the police officer said, ushering people out of the square.

Tram operations between Beyazıt and Eminönü have been suspended and the square has been closed to traffic.

Prime Minister Ahmet Davutoğlu and Interior Minister Efkan Ala met at the Prime Ministry’s office to discuss the incident.

Kurdish, leftist and Islamist militants have all carried out attacks in Turkey in the past. 'Creeping Islamization' in Turkey threatens Russia' security - Putin
"The creeping Islamization, which would probably turn Ataturk in his grave, has had an effect on us too. We can see, and we record, that militants, people with origins, say, in the North Caucasus, are staying in Turkey. We have told our partners about that many times." Terrorist bombing in Volgograd: mother shields her child with her body and is blown apart by explosion
At approximately 12.45 on Sunday 29 December 17 people were killed by a suicide bombing at the central railway station in Volgograd. At that time the railway station was particularly crowded. After three trains had been cancelled many passengers were crowded in the waiting room.
Comments
×