The Sunday of St Gregory Palamas 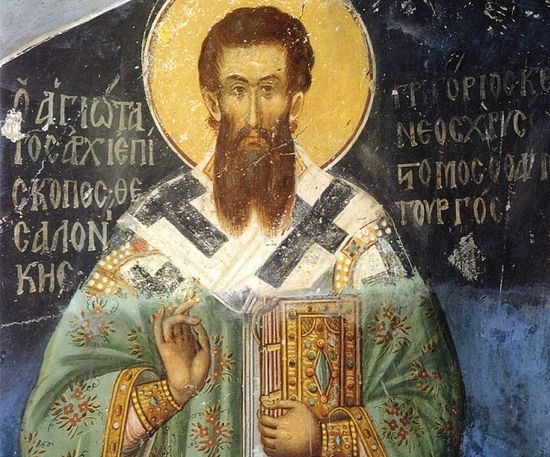 Why do we fast? Why do we make sacrifices? Why do we stand at long services? Why do we pray? To those of us who are beginning to doubt and waver after only two weeks of the Fast, the Church brings us an answer today. This answer is in the person of St Gregory Palamas, the fourteenth-century Archbishop of Salonica in Greece to whom this Sunday is dedicated.

To many of you Salonica may seem far away. Not to me, because exactly twenty-five years ago I lived and worked there for a year. And as regards St Gregory Palamas, I saw two things. 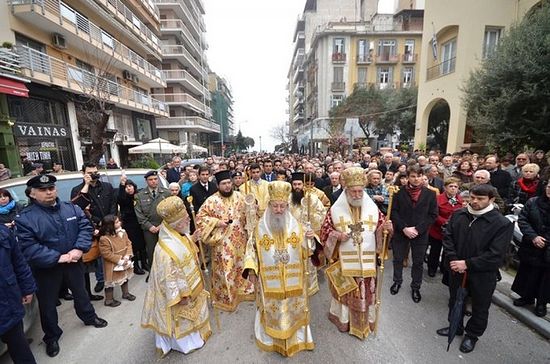 Firstly, I noticed how the feast of St Gregory is still celebrated there today, with his relics taken through the city in procession, escorted by sailors and policemen. We may wonder why his earthly remains are still held in such honour.

Secondly, I went to visit a place up in the hills behind the town of Kavalla near Salonica. There you can still see a cave in the rocks - this was the home of Gregory Palamas before he was consecrated Archbishop. It was in that cave that he spent years in fasting and prayer. And there, not caring for his body, and instead cultivating and caring for the purity of his heart and therefore his mind, he received gifts of the Holy Spirit, he came to know God. 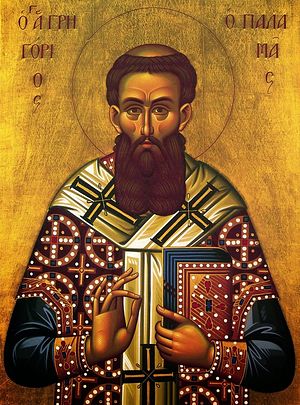 St Gregory Palamas
Now at the same time as St Gregory was living in extreme fasting and prayer, there lived a clever philosopher, also a Greek, a Hellenist, whose name was Barlaam. He said that, logically, it was impossible to know God, indeed God was by definition unknowable and inaccessible to the human mind. On hearing and studying Barlaam's philosophy. St Gregory recognized in the so-called logic of Barlaam a blasphemy, a heresy. He recognized that Barlaam lacked purity of heart and therefore mind and that his logic was the logic of the godless who only trusted in his own mental powers and imagination, the mental powers of the created, not of the Creator.

For if Barlaam were right, then all of Christ's work for us, from His Conception and Birth as a man, His Circumcision, His Presentation in the Temple, His Baptism, His Crucifixion, His Resurrection, His Ascension, to His Sending of the Holy Spirit at Pentecost, are futile, they are all in vain. Unlike Barlaam, St Gregory said that since Christ the Creator had become man and part of creation, He had made human nature potentially holy - like His own human nature. By sending down the Holy Spirit, He had given us all access in our human nature to holiness. Just as the Sun is known to us through its energies of heat and light, so God can be known to us through the uncreated energies of the Holy Spirit.

Quite simply, if we reject the teaching of St Gregory on this, we reject all the work of Christ and therefore also reject the coming of the Holy Spirit. Barlaam's philosophy would mean that we cannot know God, that there is no purpose in fasting and prayer. In fact, Barlaam's philosophy was a denial of God and therefore the foundation-stone of the last century's atheism and disbelief with all its massacres and genocides with their hundreds of millions of victims. Indeed, Barlaam's philosophy is the basis of all those recent ideas which said that there is no God, that man stands alone and lonely at the head of the Universe, for there is nothing greater than man - that he quite magically created himself in an empty and godless Universe.

St Gregory asserted the opposite to Barlaam. He affirmed that man carries in himself two tendencies, one for good, the other for evil. However, the tendency for good can only be developed in man through acquiring the grace of God, the divine energy sent to us from God, accessible insofar as our hearts and minds are pure enough to receive that grace. But this grace which enlightens and brightens us can only come to us if we repent, if we accept the process of fasting and prayer, tears and self-sacrifice. 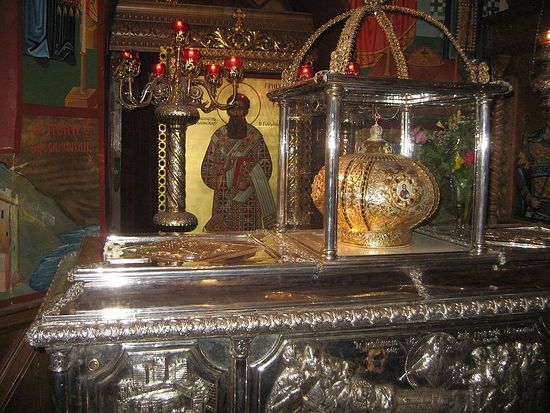 It is vital for us to understand that the thoughts of St Gregory, expressed in detail in his writings, are not just thoughts, not just another philosophy like Barlaam's, but they were based on his experience, they were divinely inspired. He was not talking about an idea, but about the reality which he had experienced as an ascetic in that cave which you can still visit today. And the fact is that it is the wonder-working relics of St Gregory which go in procession through the streets of Salonica today, not the graceless dust of the bones of Barlaam.

This is the reality of the Church, this is the grace of the energies of God, this is holiness, the experience and knowledge of God, not imagined, not the fruit of fantasy and the studies of the mind, but the reality of God known to and experienced by those who are pure in heart and mind. For as it is written: 'Blessed are the pure in heart, for they shall see God'. And this precisely is the aim of all true Christian hearts and minds.

Holy Father Gregory, pray to God for us! Divine Providence and Pastoral Care
Rev. Gregory Jensen
"Each of us must discern the providential working out of God’s grace in our own lives. Just as spouses are called to discern God’s providence in each others’ lives parents are to do this for their children. Turning from the family to the Church, priests are responsible for discerning and fostering the vocation of their parishioners and bishops for the members of the diocese. All of this is, necessarily, personal." Wendy Leonenko3/29/2016 12:50 am
Would it be possible to place a link under the Audio tab for an audio file to help teach English speakers to sing the Nicene Creed in the Russian Orthodox service?

Mark Citadel3/27/2016 6:36 pm
Was a joy to hear about this man at Church today. May he intercede on the behalf of the faithful, persecuted, opposed, and dispossessed everywhere.
×