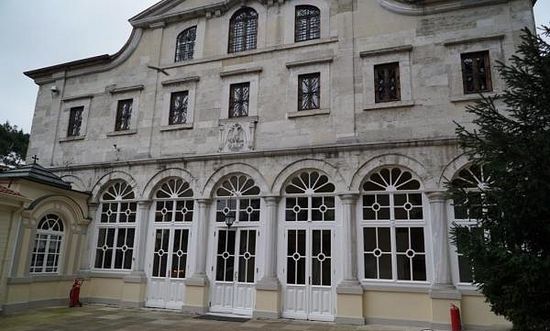 On January 12, 2017, representatives of the schismatic and unrecognized “Kiev Patriarchate” met with members of the Holy Synod of the Ecumenical Patriarchate in Patriarch Bartholomew’s official Phanar residence, according to the schismatics’ site.

General Secretary of the Holy Synod Metropolitan Bartholomew of Smyrna and Metropolitan Emmanuel of France, members of the Ecumenical Patriarchate’s synodal commission for the question of Ukrainian Orthodox autocephaly, met with the Ukrainian delegation.

Both sides exchanged views on the current state of Orthodoxy in Ukraine during the long meeting, with the “Kiev Patriarchate” representatives stressing their “church’s” official recognition of the decisions of June 2016’s Crete Council assembled by the Ecumenical Patriarchate.

Metropolitans Bartholomew and Emmanuel underlined the complexity of the Ukrainian question, but that His All Holiness Patriarch Bartholomew will make every effort to find the best solution to the problem.

In their turn, the members of the schismatic delegation expressed the hope that the Mother Church would do everything possible to ensure that its decisions would be adopted as soon as possible. Anthony1/16/2017 12:22 pm
Surprise! - Surprise-surprise-surprise! The snakes are crawling all about speaking with their fork tongues. One minute one of them says they will not recognise the schismatic-heretics. The next minute, they are meeting with them behind closed doors. Win-win situation for both of them. The schismatic-heretics get the recognition of their pseudo church, and bartholomew gets recognition from them of his illegitimate documents. You just couldn't make it up. And no doubt the western paymasters are behind all of this - divide and rule. The problem is they may be able to play their little games in the political arena. Mess with that which belongs to God and see the repercussions.
×