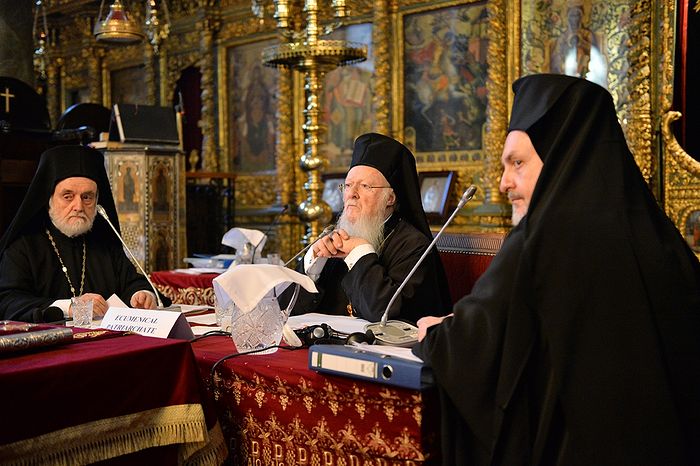 The Patriarchate of Constantinople has reacted to the appeal of the Ukraine’s Verkhovna Rada (Parliament) deputies on granting autocephaly to the Ukrainian Orthodox Church, reports Interfax-Religion.

The Synod of the Patriarchate of Constantinople has not turned down this appeal but, instead, has charged a special synodal commission with examining it, reports the Romfea Greek Church news agency.

As was earlier reported, the Verkhovna Rada recently called upon Patriarch Bartholomew I to issue a Tomos granting autocephaly to the Orthodox Church in the Ukraine and to recognize the 1686 act, in accordance with which the Metropolitan See of Kiev was transferred to the Patriarchate of Moscow “in defiance of canons”, as invalid. However, the Patriarchate of Constantinople did not respond to that appeal.

Commenting on this initiative, the Russian Federation’s Foreign Ministry Ombudsman for Human Rights Konstantin Dolgov has said that it is a transgression of the Ukrainian law and that the Venice Commission should provide an opinion on this matter. The ombudsman has also pointed to the fact that the Verkhovna Rada is promoting a number of bills that “are aimed at the ultimate legalization of taking over church buildings of the Ukrainian Orthodox Church of the Moscow Patriarchate by raiders.”

There are three active Orthodox religious organizations in the Ukraine: the canonical Ukrainian Orthodox Church of the Moscow Patriarchate (UOC MP), the “Kyiv Patriarchate”, and the Ukrainian Greek Catholic Church, and the latter two are not recognized in the Orthodox world.

Earlier Ukrainian President Petro Poroshenko more than once expressed the idea of establishing one local (autocephalous) Orthodox Church in the country. One of the goals of this initiative is to separate UOC MP from the Patriarchate of Moscow. UN recognizes violation of rights of Ukrainian Orthodox Church of Moscow Patriarchate in Ukraine
Members of the UN monitoring mission reported instances of physical violence, or compulsion, aimed at forcing people to change their creed, the report says. Kyril7/21/2016 7:09 am
To the Ukrainian Orthodox who despise Moscow so terribly and want nothing to do with her I have a serious suggestion. Join the Ukrainian Greek Catholics. There you could be as "Ukrainian" as you want to be all the while having absolutely no communion nor contact whatsoever with the Russians whom you hate. I mean this in all seriousness. Also, I mean no disrespect towards Ukrainians , their culture, their state, etc. They have a beautiful and rich culture and faith (I myself am Carpatho Russian). But seriously, why try to remain within the Orthodox Church if your hatred towards Moscow is so great? Why would you want to be in communion with Moscow yet have nothing to do with her?

anthony7/20/2016 5:47 pm
When the Russian Orthodox Church expressed its deep concerns over the unlawful arrest of Geronda Ephraim Vatopaidiou by the lawless Greek state, the Phanar told the ROC to mind its own business, as Mt Athos is (unfortunately) under Constantinople's jurisdiction - noting that the Phanar had given no support whatsoever to Geronda during this disgusting episode in Greek history. Why then does this CIA shill schismatic Phanar not now take his own advice and keep his nose out of other jurisdictions' business.

Martin Kalyniuk7/20/2016 6:08 am
They are so far removed from Ukrainian reality that they cannot comprehend the consequences should they do this. Or maybe they can.

It would mean the legalised persecution of the Orthodox in Ukraine (granted it's begun before any Greek interference already). We would see and suffer the seizure of temples, Cathedrals and monasteries—all in the name and under the auspices of the Patriarch of Constantinople.

The only beneficiaries would be a minority of schismatics (one body of which already has a ready-to-hand false patriarch), rich, ruthless and irreligious oligarchs, nationalist fanatics and finally foreign forces who do not mean us well.

It would be a unique event in the life of the Church—a great and fierce persecution inaugurated not by a pagan emperor, atheist dictator, Muslim khan or sultan but by a Patriarch of Constantinople. A fraternal betrayal to spite one who they call but do not treat as an equal.

Lord God spare the much-suffering people of Ukraine at least that.

Martin Kalyniuk7/20/2016 6:04 am
How dare they?! Just another example of Ukrainians being used as a toy in a game between people with power.

Does his holy eminence, the first among ectera, ectera, ectera, realise that the overwhelming majority of religious Ukrainians belong, love and are loyal to the Patriarchate of Moscow? Have suffered so much and so recently—are even now marching in a Cross procession across the country while being harassed and threatened all along the way. While some Greeks think they can decide whether or not we are one with our brothers and sisters in Russian Federation and Belarus.

Said Greeks lost the right to pick a Patriarch for the Russias when they fell into heresy (save St. Mark) in an attempt to unite with the West in the 15th century. And look at them today. Itself, repeats, history and all that. I presume the loss of that right carries within it the loss of any right (supposing it to have ever existed) to choose which lands are autocephalous as well.

Jeremia7/20/2016 1:05 am
Ukrainian "Greek Catholic Church" is not Orthodox at all, they're romancatholics of the uniate variety. You were thinking perhaps of the Ukrainian "Autocephalous Orthodox Church".
×