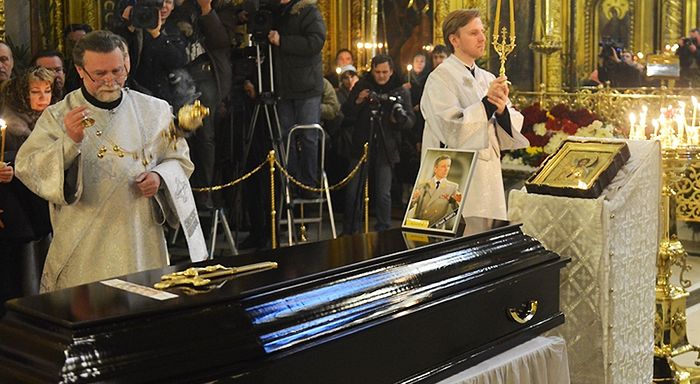 On December 25, the Russian Defense Ministry’s Tu-154 plane from Moscow crashed into the Black Sea shortly after refueling near Sochi, on its way to Syria.

Unfortunately, all ninety-two people aboard died in the crash, including eight crew members, sixty-four musicians of the Alexandrov Ensemble who were going to offer a New Year’s concert for Russian troops, nine reporters, two federal civil servants, and Elizaveta Glinka, the head of the Fair Aid charity fund, known affectionately as “Dr. Liza.”

Funerals for the departed have been served on Saturday the 14th and Monday the 16th throughout Moscow.

In his homily Met. Hilarion spoke about the reposed: “He lived not long by human standards, but it was a beautiful life. Valery Mikhailovich’s death was tragic … but for God there is nothing accidental—He determines the time of a person’s birth and the time of his death… We stand before the coffin of the deceased, but we are not inconsolable, because we know that beyond the threshold of death, eternal life waits for man. And we know that Valery Mikhailovich was a sincere and deeply believing man. He knew and believed that after death he would meet the Lord.”

Khalilov’s entire life was devoted to his country, serving as Russia’s chief military conductor, and leading for many years the Moscow military orchestra during parades on Red Square. “The memory of Valery Mikhailovich will remain in the military-musical school from which he graduated, and which will now bear his name,” His Eminence stated.

That same evening a performance during Met. Hilarion’s “Christmas Oratorio” was devoted to Valery Mikhailovich’s memory.

On Monday, January 16, the funeral of another forty-seven victims of the Tu-154 crash, including crew members, Anton Gubankov of the Defense Ministry’s Culture Department, members of the Alexandrov Ensemble, and four reporters, was celebrated in the Federal military memorial cemetery near Moscow, attended by Russian Defense Minister Army General Sergei Shoigu, Transport Minister Maksim Sokolov, and members of Parliament as well as family members, friends and colleagues of the departed attended the funerals, reports TASS. 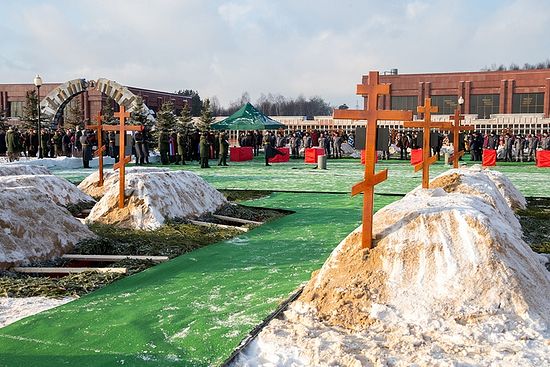 The same day in Novodevichy Monastery’s Dormition Cathedral a farewell ceremony for Elizaveta Glinka, founder and head of the “Fair Aid” charity fund, was celebrated. The much-beloved “Dr. Liza,” known for her work with Moscow homeless and all in need, was aboard the downed plane to offer humanitarian aid to Syrian hospitals.

Several dozens stood by her coffin to prayerfully see her off, including head of the Presidential Human Rights Council Mikhail Fedotov, member of the Public Chamber Vadim Kovalev, president of the “Faith” charity fund Nuta Federmesser, and many others, according to TASS. 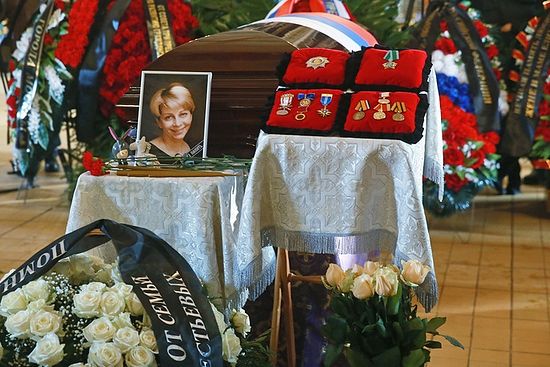 Wreaths from President Putin, the Minister of Defense, the Human Rights Council and family members adorned Dr. Liza’s coffin, along with her various awards. One of the wreaths stated in golden letters: “There have been none like her, and there will not be.”

“We should carry on with her work because it is very important. We should feed the homeless, provide help for terminally-ill people, and save and treat the children of Donbass. The charity fund established by Dr. Liza should continue to operate,” emphasized the head of the Human Rights Council.

“She was unable to walk past injustice, past the ulcer on a homeless man’s leg. This applies to all of us—whether we can drive a homeless man from our doorway into -30° weather,” Federmesser added.

Following the farewell ceremony the funeral proper was to be served with an intimate gathering. Central Florida parishes offer prayers in wake of Orlando shooting
Clergy and faithful from Central Florida gathered at Saint George Antiochian Orthodox Church in downtown Orlando on the evening of Tuesday, June 14, 2016 to pray for the victims of the tragic mass shooting that occurred two days earlier.