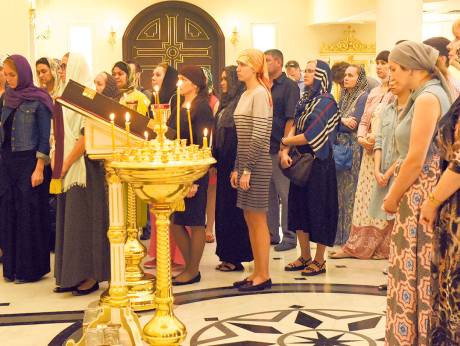 People pray for the victims of Saturday’s flydubai plane crash during a service at Sharjah Russian Orthodox Church.

Russian community on Sunday gathered at the Russian Orthodox Church in Sharjah for a special memorial service to pray for the victims of flydubai air crash.

All 62 people, including seven crew members, died on Saturday morning when the flydubai flight FZ981 nosedived and exploded in a giant fireball in Rostov-on-Don in southern Russia.

The passengers, most of whom were tourists, included 44 Russians, 8 Ukrainians, 2 Indians and 1 Uzbekistani.

On Sunday, a large crowd of mourners gathered at the Russian Orthodox Church to pay their respects to the departed souls.

The two-hour long ceremony included special prayers for the peace of the souls.

“We are all saddened, the entire community is saddened. This could happen to any of us. This is a loss and pain for all of us. I was particularly shocked as I travelled to Rostov-on-Don by flydubai last month and I thought ‘Oh my God, it could be me,’ my prayers and sympathies to all the relatives of the victims,” said Natalia Denysuik, who attended the mass on Sunday.

Tatiana Magee, another mourner, said: “this is a big tragedy. Air crashes are happening more frequently these days and we are praying for the safety of all travellers. I travel by flydubai often and it’s a nice airline. It’s not about any particular airline, it could happen to anyone and hope we are all safe.”

Archimandrit Alexander Zarkeshev, Rector of the Russian Orthodox Church, who led the prayers, said: “None of the crash victims were our parishioners, most of them were tourists, but we pray for all. Our hearts are saddened by this tragedy and we pray for the victims and their families.”

Speaking to Gulf News following the memorial, he said: “As soon as people heard about the crash, I started getting calls and many people came to the church and we held prayers on Saturday as well. Everyone was worried, trying to find out if there was anyone from the parish among the victims.”

Gulf News on Sunday reported that one of the victims, Inna Negodaewa, 49, was a long-time resident of Dubai. She was returning to her only daughter and son-in-law, who live in a nearby city Krasnodar. Russia to Honor A321 Crash Victims on 40th Day After Catastrophe

Russia to Honor A321 Crash Victims on 40th Day After Catastrophe
Memorial services for the victims of the Russian A321 airliner crash in Egypt will be held in Moscow and St. Petersburg on Wednesday, which is the 40th day since the tragedy, an important date for Orthodox Christians. Russian Orthodox Church collects over 39 million roubles in aid to victims of wildfires
By August 20, the amount of 39,052,000 rubles (1, 27, 813 USD), 26,254 US dollars and 5,451 euros have come to the accounts of the Synodal Department for Church Charity and Social Service as of August 18, the website Miloserdie.ru has reported.
Comments
×