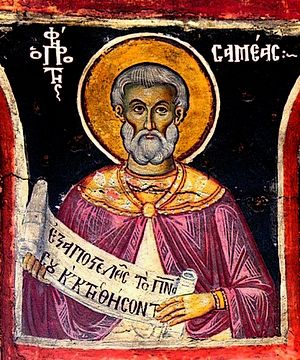 The Prophet Shemaiah (Samaia) lived under King Solomon and his son Rehoboam. At that time, the kingdom of Israel in the north was divided from the southern kingdom of Juda. Israel was comprised of ten loosely united tribes, and Juda of two tribes. The prophet ordered Rehoboam not to make war against the ten tribes of Israel, who had separated themselves from the offspring of David (3/1 Kings 12:22, 2 Chron. 11:2). His name means “God hears.”