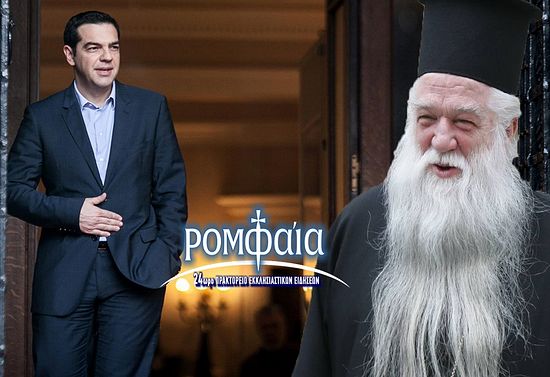 An open letter to Greek prime minister Alexis Tsipras from the outspoken Met. Ambrose of Kalavyrta has been published in full on the Greek portal Romfea, a summary of the main points being posted on Agion Oros.

The prelate begins by reminding the prime minister that he had once believed in his pre-election promises, looking forward to the implementation of Tsipras’ policies for liberating Greece “from the occupation of its European partners.”

Instead, Met. Ambrose writes that he was disappointed to find that Tsipras had “set himself the goal of destroying the Greek Orthodox Church,” and accuses the government of deliberately leading Greece to catastrophe through destroying its economy, cultural heritage, history, traditions, and Orthodox faith.

He further writes of the destruction of education and the serious blow to the family in the form of “legalized same-sex unions, the participants of which receive the same social benefits as traditional families.”

Met. Ambrose also writes of the avowed atheist Tsipras’ hypocritical presence at Orthodox Divine services, during which he behaves shamefully, showing his indifference and laughing. “Perhaps it is worth it to recall the example of St. Ambrose of Milan’s not allowing Emperor Theodosius the Great into the church?” he asks, placing partial responsibility at the feet of the Church hierarchy who allowed a declared atheist to attend the Divine Liturgy.

St. Ambrose of Milan famously refused to allow the emperor to enter his church after troops under his command massacred thousands in Thessaloniki in retaliation for an uprising in 390.

Met. Ambrose has never shied away from condemning spiritual, cultural, and educational conditions in Greece and what he sees as the current government’s role in the degradation of the great Orthodox nation. In December he wrote an open letter to the prime minister castigating him for comparing the 1821 Greek Revolution with the 1959 Cuban Civil War at the funeral of Fidel Castro. Metropolitan Amvrosios of Kalavryta: Soon the only thing left for us to do will be to sing "Memory Eternal" to Greece!
The end of Greek Christian culture will mean the end of Greece as a state as well. This process is developing very rapidly and soon there will be for us only to sing ‘Memory Eternal!’ to Greece.
Comments

Isidora1/21/2017 2:56 pm
Why castigate this poor secular puppet when the real problem lies with the Orthodox Church tolerating the globalist tool Patriarch Bartholomew?