“Refugees are being sent to Greece with the view of changing its national and religious identity, so that from a country of Orthodox Christians it might turn into a state of Muslim immigrants,” Metropolitan Amvrosios stressed in a recent statement, reports AgionOros. 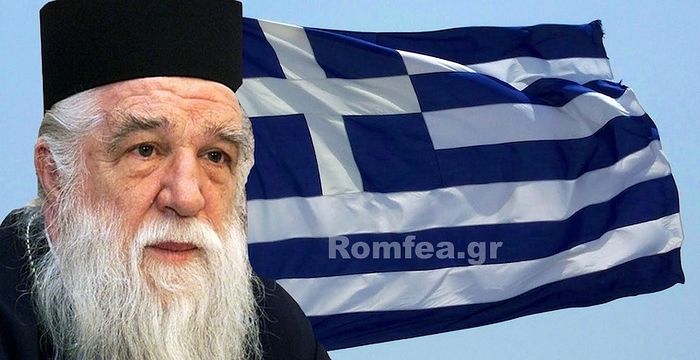 According to the hierarch, Greek state television “is contributing to the peaceful invasion of Greece.” “What is the meaning of the transmission of news reports in Arabic? Does any single immigrant have a TV or an opportunity to watch programs on the Greek state channel? And who asked the Greek citizens who pay taxes towards state TV?

We express our indignation at this crime against the nation! By broadcasting programs in Arabic, we legitimize the multitude of settlers! We a priori recognize them as legal residents of our country!

At the same time, state television has been silent about the great charitable work of the Church, the self-sacrificing work of our clergy and laity. The media has also ignored the rally against electronic ID cards that gathered thousands of participants. Meanwhile, as many as 16 TV programs in Arabic have appeared for the immigrants!

The end of Greek Christian culture will mean the end of Greece as a state as well. This process is developing very rapidly and soon there will be for us only to sing ‘Memory Eternal!’ to Greece.”

DIMITRI PAIZIS5/22/2016 1:06 pm
what can one expect of a communistic, ultra-liberal, atheistic, humanistic, anti-nationalistic government

Siobhan Awad4/8/2016 4:48 pm
Being raised in the Russian Orthodox Church and married to Coptic Christion from Egypt I fear Greece being overtaken by those that would water down Orthodoxy in Greece. Greece is an Orthodox country and should stay an Orthodox country. I visited Greece many times in the 80s and 90s and could feel the pulse of my faith coursing through the veins of everyday life. Would it be so today?
×