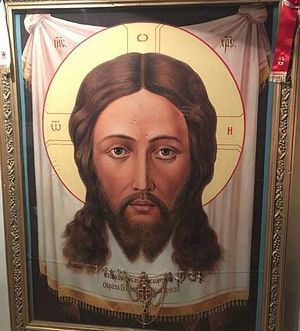 Photo: Kazinform
An icon of Christ “Not Made By Hands” in Kazakhstan began streaming myrrh again during the forefeast of Theophany, reports Kazinform.

The icon, in the church of the Three Holy Hierarchs in the city of Karatau, in the Zhambyl region, was painted by local artist Viktor Isaev in 1999. Others of his icons have also been known to exude myrrh.

Myrrh was first noticed on the icon of the Savior in Holy Week on March 26, 2000, the sweet-scented healing substance appearing on His face in small beads. The first miracle occurred when the icon was taken to the city of Taraz for a Moleben where a nine-year-old girl was healed from blindness. Subsequent healings occurred with people with kidney disease, severe skin diseases, and drug addiction.

The flow of myrrh is typically considered a sign foretelling important, momentous events, or to be given for physical healing and spiritual bolstering. This time, according to long-time rector Fr. Peter, the icon began weeping myrrh on January 15, during the forefeast of Theophany.

The Three Holy Hierarchs—Sts. Basil the Great, John Chrysostom, and Gregory the Theologian—are considered the patron saints of Karatau, with the parish in their honor being built in 1989, the city’s first Orthodox church. During a devastating hurricane that left residential and industrial buildings in ruin, the church survived. Now the Karatau church, with its unique icons, is place of pilgrimage. Three icons begun to stream myrrh in monastery near Astrakhan
A strong, sweet fragrance spreads throughout the whole church. Monk Mitrophan, inclining towards the icons, inhales the gentle aroma and expounds—the Life-giving Cross has a woody scent, reminiscent of sandalwood. From the icon of the Royal Martyrs a pure, clean fragrance—after all it is a genuine family of five children and their parents.