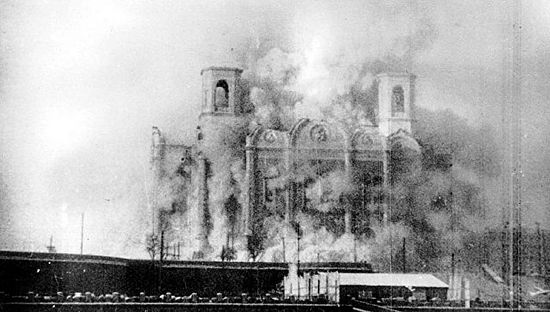 The World Russian People’s Council (WRPC) has proposed December 5, the anniversary of the explosion of Christ the Savior Cathedral, as a civil day to remember ruined churches of all traditional religions in Russia. The idea was presented at a press conference on Friday by the head of the council’s Expert Center Alexander Rudakov, reports RIA-Novosti.

“We are proposing to discuss the question of making this date a public day—The Day of Remembrance for Ruined Churches—not only of the Russian Orthodox Church, but all churches and religious objects of traditional religions which have been ruined, destroyed, blown up, and desecrated in the era of godless persecutions,” said Rudakov.

“This date proposed by us for discussion—The Day of Remembrance for Ruined Churches—is not an occasion for historical revenge, for settling historical accounts. It is really an occasion to reflect on the tragedies of our past and make sure they never happen again,” the WRPC representative added, noting that they see the proposal as an opportunity to consolidate rather than split society.

According to Igor Garkavy, director of the Butovo Memorial Center emphasizes that Russians should “understand the magnitude of what was lost.” Before the communist revolution there were 57,000 churches in Russia—6,000 in 1991. Among the loss was Moscow’s Christ the Savior Cathedral, blown up on December 5, 1931, and restored in the 1990s. Butovo, a site of mass executions and graves, is now a place of pilgrimage just south of Moscow, where stands a new church in honor of the New Martyrs and Confessors of Russia.

Garkavy has also proposed erecting memorial crosses, or at least a plaque, on the site of ruined churches not yet restored.

The World Russian People’s Council is an international public organization founded in 1993, granted special consultative status to the UN in 2005. Patriarch Kirill serves as the council’s head. Why Moscow's most iconic church used to be a swimming pool

Why Moscow's most iconic church used to be a swimming pool
The Soviets blew up Moscow's once majestic Cathedral of Christ the Savior. Now, its golden cupolas shine again in Moscow. Along the way, it was a site for prestigious communist projects - like a massive swimming pool. Exhibition, "Overcoming: Russian Church and Soviet authorities" opens in Yaroslavl
The materials that underlie the exhibition were prepared by St. Tikhon's Orthodox University and the Museum of modern history of Russia.
Comments
×