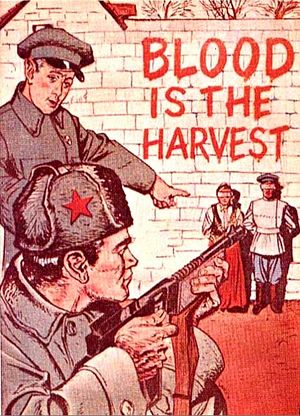 Photo: http://66.media.tumblr.com/
Thousands of people may have been subjected to repression for Orthodox faith under Soviet rule, church researchers said.

"The total number of victims in the years of the repression currently cannot be determined because the archives of the relevant agencies are not accessible to the public. However, church researchers believe the number of people who suffered for their faith may reach 500,000 people," Metropolitan of Ufa and Sterlitamak Nikon said at the 6th Tabyn Recitals entitled '1917-2017: Centennial Lessons.'

The names of 1,774 saints have now been included in the Assembly of New Martyrs and Confessors of the Russian Church, he said.

The hierarch said most people of Russia kept their Orthodox faith despite the persecution of the Church.

"According to the population census conducted in 1937, when anti-religious propaganda in the USSR reached its peak, 56.7% of the people aged 16 and older were believers," he said. “He spends all his time in the cathedral and even forgets to eat.”
Archimandrite John (Krestiankin) as the soviets saw him (1955)
Hierodeacon Theophan (Bortnikov)
Today is the tenth anniversary of the repose of Archimandrite John (Krestiankin). To commemorate him we present an unusual testimony to his zeal and Christian love—a sort of apophatic approach to the biography of a saintly man. It comes from reports written by the Pskov plenipotentiary for religious affairs A. I. Luzin, whose job it was during the atheist Communist period to watch Fr. John’s every move and report back on his “crimes”. Rare book on His Holiness Patriarch Sergius (Stragorodsky) published
The book relates the life and activities of Patriarch Sergius, who was the head (locum tenens, and later patriarch) of the Russian Orthodox Church during very difficult years for the country—the 1930s and 1940s.
Comments
×