Massive influx of pilgrims is problem for Mt. Athos—abbot of Simonopetra 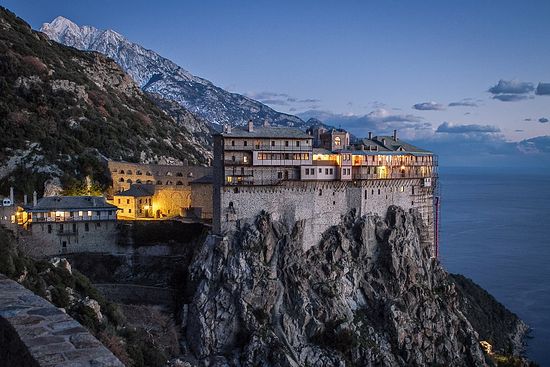 The massive flow of pilgrims has become a serious problem for the inhabitants of Mt. Athos, says Archimandrite Elisha, abbot of the mountain’s Simonopetra Monastery.

“Another way in which the world today encroaches upon the life of the monasteries is the massive influx of pilgrims, who greatly affect the life of the monks… Today the flow of pilgrims is the greatest problem for the monasteries of the Holy Mountain,” the abbot writes in a report for the 25th annual Nativity Educational Readings, reports RIA-Novosti.

The abbot of course recognizes that hospitality is a virtue traditionally characteristic of Orthodox monasticism, and that the monks are always ready and glad to accept pilgrims, “performing, thus, the commandment of love of neighbor,” however, “they tried not to change the basic principle of monasticism, not to forget, that they renounced the world… In our time the situation has changed,” he states. The abbot and his brotherhood were earlier forced to leave their home in Meteora and move to Mt. Athos due to the flood of Orthodox tourists.

He goes on to note that the danger is that hospitality, being understood in a distorted sense, threatens to turn monasteries into regular parishes, forcing the priests there to devote their full energy only to pastoral work. While “it is comforting to see so many people from various walks of life,” the main purpose of monastic life is “to proclaim the Kingdom of God, abiding in podvigs and silence.” To combine the two is difficult and rarely successful notes Fr. Elisha.

“The best offering of monks to people is the renunciation of the world, expressed in silent prayer and the heart’s yearning for God. We must understand that the laity desire to see in a monastery not those monks that everyone knows, who keep up with the latest events and are ready to offer solutions to various political and social problems… They come to the monastery to detach themselves from daily life and touch eternity, but they find there the same mundane reality as in the world,” the abbot concluded. 'Athos, the Colors of Faith' depict monks' lives and faith

'Athos, the Colors of Faith' depict monks' lives and faith
Spirituality, faith, silence, mystery, untouched natural landscapes and meditation are what Mount Athos is most known for. The 'theocratic republic' in northern Greece is where Orthodox monks, spread out among a few medieval monasteries, live an existence of work and prayer that has remained unchanged for centuries and is depicted in an exhibition of photos by Stratos Kalafatis in Rome entitled 'Athos', the Colors of Faith'. Mount Athos Now Has its Own Smartphone Application

Mount Athos Now Has its Own Smartphone Application
The user can download the free application that will remind them of religious holidays, days of fasting, Greek Orthodox feasts, while also provides all the information about monasteries.
Comments

Anthony1/25/2017 11:07 pm
Dean Nicholas - if you're planning on ever becoming a priest, might wanna reconsider. Seriously.

Deacon Nicholas1/25/2017 8:07 pm
Just wait until the Muslim refugees come. Then you'll wish for the masses of pilgrims!
×