His Holiness Patriarch Kirill addressed deputies of the State Duma on Thursday, January 26, calling upon them to focus on their service to the Russian people, touching upon several urgent topics such as corruption and abortion. 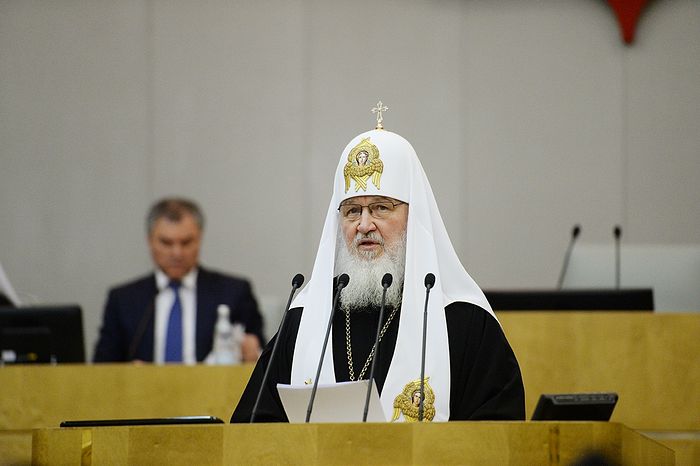 “Perhaps one of the most serious temptations of government service on any level is corruption,” the patriarch said, opening 2017’s Nativity Parliamentary Meetings.

Drawing upon the spiritual principle seminally articulated in King David’s psalm of repentance: If Thou hadst desired sacrifice I’d have given it; with whole burnt offerings Thou shalt not be pleased. A sacrifice unto God is a broken spirit; a heart that is broken and humbled God will not despise (Ps. 50:16-17), His Holiness reminded the state servants that “God awaits from us a change of life, not a formal donation towards Church needs. God cannot be bought with alms. He needs the rectification of man, that his sacrifice would be a symbol of genuine repentance for his sinful deeds.”

Emphasizing that one cannot serve two masters, the primate told them, “It is impossible to be truly faithful, to go to church, to take part in parish and even Church-wide life while taking bribes or profiting from dishonest financial operations… I would like to especially note that Orthodoxy is incompatible with moral relativism, one of the manifestations of which in modern society is corruption.”

The patriarch also addressed the gathered politicians on a number of other issues, including abortion, which remains a serious problem in Russia.

“Thank God, we are seeing some definite progress. However, continuing to receive thousands of letters from the faithful with the request to call upon the authorities to solve the problem of abortion, I ask you not to abandon the gradual efforts to overcome this terrible phenomenon,” he exhorted, according to Interfax-Religion.

His Holiness went on to dismiss as a myth the notion that abortion is sometimes necessary to guarantee personal well-being. The move towards outlawing abortion “is not a revolutionary change, but a return to normal life, without which men and women’s happiness is unthinkable, and the future of our people is impossible.”

He also encouraged the Duma to develop measures that support motherhood and childhood, thus creating conditions that will help reduce abortions, including adding large families to the categories of citizens exempt from property tax.

The primate also proposed that the deputies consider creating banks specifically for the poor and to prohibit the system of microfinance loans, which he termed an “immoral practice” of usury.

Finally, he also called upon the state servants to focus on truly serving those whom they represent, rather than personal or corporate interests, and to stop seeking media glory. A Word from the Patriarch
The undermining of peoples’ moral foundation that we are witnessing now may lead to the dehumanization of the world. It is no coincidence that futurologists now raise the “post-human” theme more often, while “transhumanism”—a concept of nearly overcoming human nature and the appearance of a new class of rational beings—is becoming more and more popular.