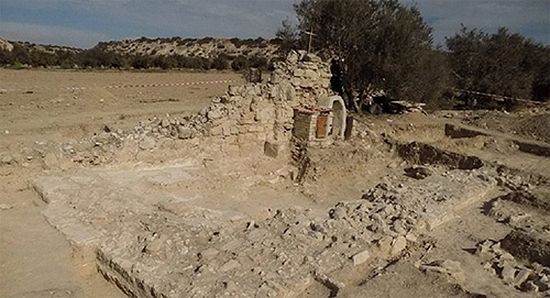 Archaeological expeditions in search of ancient Georgian monasteries and churches on the island of Cyprus, known from ancient sources, have been underway since 2015. In December scientists reported a new discovery.

According to Blagovest, Georgian researchers recently found the small ruin of a wall near the village of Alaminos, west of the city of Larnaca. The area is surrounded by hills, with a flat field currently used for farming. The archaeologists believe the find bears witness to the existence of an ancient church, and that the discovered wall is in fact a part of it.

The village of Alaminos and a Georgian monastery located not far from it were written about by Stephan Luziniel in a work published in Paris in 1580: “The Iberians had a few monasteries on the island, mostly near the village of Alaminos,” reports National Agency for the Protection of the Cultural Heritage of Georgia.

During the excavations specialists found the entire perimeter of the church’s foundation, with fourteen graves located around it. Research suggests that the church and graves date to the twelfth through sixteenth centuries.

The excavation is headed by Tbilisi State University doctor of historical sciences Prof. Vakhtang Licheli and funded by Foundation for the Protection and Preservation of the Historical Monuments of Georgia. The team will continue its work in 2017 to establish the Georgian footprint at the newly-discovered ruin.

In 1981 archaeologists discovered the ruins of a Georgian monastery in Gialia, 93 miles northwest of the current find.