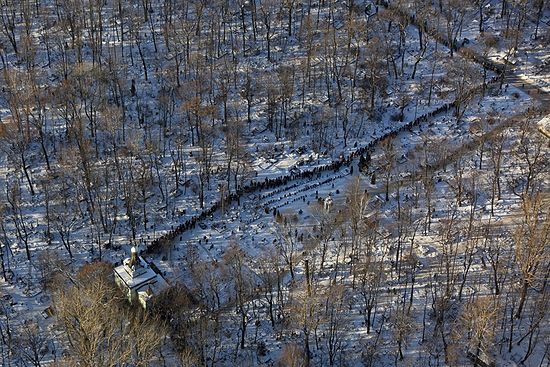 Thousands of faithful came yesterday, Monday, February 6 to pay their respects to St. Xenia of St. Petersburg on the day of her commemoration in the Church, the press service of the St. Petersburg Diocese reported to RIA-Novosti.

The faithful waited for hours in a line that stretched throughout the Smolensk Cemetery where her relics are located in a small chapel.

“Today, February 6, the Russian Orthodox Church celebrates the memory of one of the most revered saints, known far beyond the bounds of Russia—Blessed Xenia of St. Petersburg… Many citizens of the northern capital and a huge number of pilgrims from other cities traditionally come to the Smolensk Cemetery in St. Petersburg on this day,” said Natalia Rodomanova, head of communications for the diocese.

She also noted that although St. Xenia was canonized only in 1988, her place of burial has been a place of pilgrimage since the nineteenth century. The faithful often carry away rocks and dirt from around her tomb. 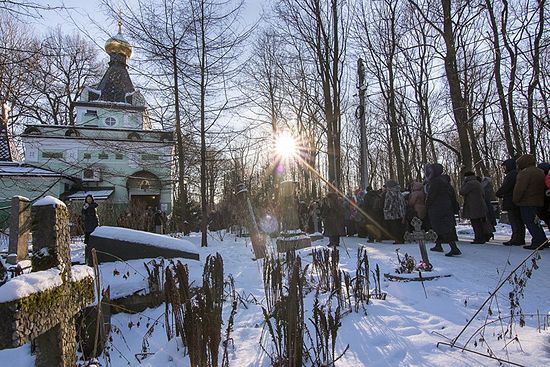 Metropolitan Barsanuphius of St. Petersburg and Ladoga celebrated the Divine Liturgy at the Smolensk Icon of the Mother of God Church in the cemetery, which St. Xenia had helped to build, working secretly at night. The faithful streamed in from early morning until late in the evening to light candles and venerate the relics of their beloved saint.

Her headstone bears the inscription: “Who knew me, remember my soul for the salvation of your soul.” A small chapel was erected over her grave in the early twentieth century. We’ve Come to Matushka… Remembering Blessed Xenia
Alexei Maximov
It is amazing! These people don’t have the mark of “religiosity” that we are accustomed to seeing—that customary piety, studied prayerfulness. People are not dressed too piously, but in their eyes and on their lips is a prayer that’s not taken from a prayer book—it is a prayer that breaks forth from the heart. Should I start a conversation with them? But they didn’t come here for discussion.

The Life of St. Xenia of Petersburg
January 24/February 26
Having come to know the inconstancy of earthly happiness through the death of her beloved husband, Xenia strove toward God with all her heart, and sought protection and comfort only in Him. Earthly, transitory goods ceased to have any value for her. Xenia had a house; but gave it over to an acquaintance under the condition that it be used to shelter paupers. But Xenia herself, not having a refuge, would wander among the paupers of Petersburg. At night she would go out to a field, where she spent the time in ardent prayer.
Comments
×