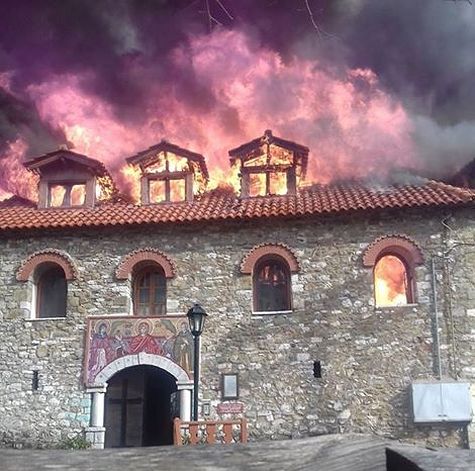 A serious fire broke out two weeks ago at one of Greece’s oldest monasteries. The monastery of Varnakova, fifteen miles to the east of Nafpaktos, just north of Corinthian Gulf coast, was built in 1077 by St. Arsenios Varnakovitis, on a small hill which lies within a vast forest of oaks and wild chestnuts.

The fire broke out in the boiler room and quickly spread throughout the entire monastery, reports Greece Today. Eleven fire trucks showed up to quickly extinguish the fire, but not before it caused considerable damage, including to the monastery’s archives.

Thankfully, all the brothers managed to evacuate the monastery and saved their miraculous icon of the Theotokos.

The monastery is dedicated to the feast of the Dormition of the Mother of God, and after its founding in the eleventh century quickly became a center of Orthodoxy in the region. Church at Russian Monastery of Myrrhbearing Women burns
The fire caused considerable damage, but, thanks be to God, all are alive and no one was hurt. Thassos Monastery Fire Fund
On September 9, 2016, the Monastery of the Archangel Michael on the Island of Thassos in Greece, one of the monasteries under the guidance of well-known Orthodox spiritual father, Geronda Ephraim of Arizona, was ravaged by fire. Fire destroys church at Ascension Monastery Church, Clinton, MI
His Eminence, Archbishop Nathaniel of Detroit and the Romanian Episcopate and Priest Vicar Dan Hoarste traveled to the monastery to be with the monastic community immediately upon learning of the blaze. His Beatitude, Metropolitan Tikhon requested the faithful to keep the monastery brotherhood in their prayers. During this difficult time, the Episcopate also offers prayers to grant peace and comfort to the monastic community during this difficult test. Tragic cathedral fire sparked by Easter candles
Investigators were able to find evidence in the remains of the Serbian Orthodox Cathedral of St. Sava on West 25th Street that proved caretaker, Slobodan Ljubenko, 69, had accidentally caused the May 1 fire by failing to put out the candles, sources said. Orthodox hierarchs offer prayers and encouragment in midst of Alberta wildfires
O loving and merciful God, our help in time of need, You are our rock and refuge, our comfort and hope. Deliver us from the trouble that now besets us. Blessed is Your name, Father, Son and Holy Spirit, now and forever. Amen. Fire broke out at Georgian Orthodox Church's main cathedral
Firefights and rescuers worked through heavy smoke, but none were injured.
Comments
×