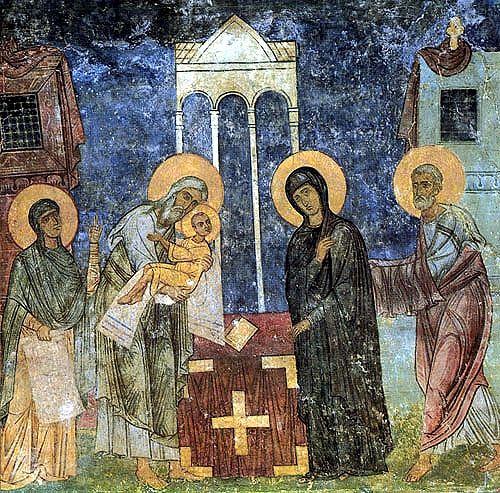 As with all the sacred events celebrated by the twelve great feasts, the Meeting of the Lord also is rich in content that is difficult immediately to grasp. Let us dwell in thought only as it were on the historical meaning of the event.

On the day of the Meeting of the Lord, an encounter occurred between the Old and New testaments. Old Testament humanity—in the person of the Elder Simeon and the Prophetess Anna—saw with it's own eyes, in the Person of the Child Jesus, the realization of all its expectations and the meaning of its own existence. Old Testament humanity, although it was not deprived of Divine Revelation concerning the meaning of life and even had communion with God to a limited extent, all the same, became increasingly more conscious of the limited degree of this communion. This humanity, through its best representatives, thirsted for something greater, and unto these people, the best representatives, thirsted for something greater, and unto these people, the best of the Old Testament, God gradually revealed that in the future the fullness of good and the fullness of communion with God would be given, so that the spiritual thirst of humanity would be satisfied. Gradually, to the ancient prophets was revealed the mystery concerning the future appearance of the Messiah, the special Anointed of God, the Bearer of Supreme Truth.

People understood and conceived of the image of the future Redeemer in different ways Of course, the Jews, correctly considering themselves to be the chosen people, saw in the Messiah their Savior from those historical calamities that had overtaken them; but many of them also understood that the future Messiah would be the Possessor of Supreme Truth and even a Man who would suffer for the Truth. Based upon what Simeon himself said, it is possible to think that he expected both from the Messiah. But what exactly he waited for is not even so important as the fact that he thirsted for the appearance of the Messiah. Old Testament Simeon lived by this expectation, and in this expectation he lived not for himself, but for his people, God's people. It is hard to doubt that it was exactly because of the special intensity of his Messianic expectations, in which his spiritual life was expressed, that Simeon was chosen to receive a special Revelation. And this was a great revelation, a revelation above measure; it cut short the life of Simeon himself, because the life of the Old Testament—the fullness of which Simeon lived by—ended. Such a death could only be joyful, because in it was revealed the meaning of all life. The words of Simeon himself, "Now lettest Thou Thy servant depart…" was, as it were, the Old Testament "It is finished!"; the "it is finished!" which the Crucified Messiah Himself said in the New Testament. In the one and the other "it is finished!" there was great joy, inspired of the fact that death followed in each case after these words. The joy consists in the fact that there is Meaning in the world. Moreover, from the words of Simeon we know that this meaning can be revealed to other also; it is revealed before the face of all peoples and is the glory of the people of Israel and the world—even for pagans.

Simeon's mission was the mission of the Old Testament Church: to ignite faith in the coming Savior and to be prepared and to prepare for this meeting. The mission of each of us is also the mission of the Church. We must prepare and be prepared for the new final meeting with Christ. Then all humanity will be called to say its third and final, "Now lettest Thou Thy servant depart," its final "it is finished!" In simpler language, this means that we are saved not alone but together in the Church; we are saved while saving not only ourselves but others also.

If he will live always in this conscientiousness, in such a spiritual way, then at the approach of his end he will joyfully say his own "Now lettest Thou Thy servant depart…"; his own, "it is finished!" 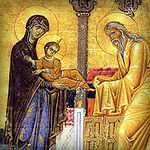