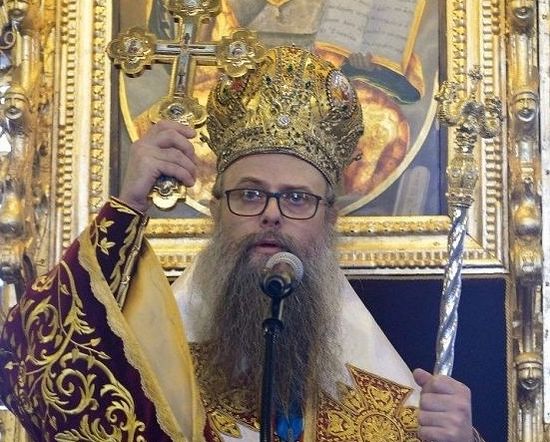 Metropolitan Nicholas of Plovdiv. Photo: The Information Department of the Ukrainian Orthodox Church

“Vladyka Onuphry is the Orthodox and canonical bishop who walks along the path of faith and eternal salvation with fear of God in his life and service. He is a man who always has the image of our supreme Shepherd the Lord Jesus Christ in view, and serves Him faithfully. It’s not just my opinion, but that of the whole Bulgarian Orthodox Church and the opinion of the Bulgarian Orthodox people,” Met. Nicholas emphasized.

And he leads not only by example, but he helps the Ukrainian people his unceasing prayer: “In recalling Vladyka Onuphry, the first image that arises in my heart is that of a man of prayer. Thank God that the Ukrainian Orthodox people have such a primate, a holy man of peaceful spirit and a serious man of prayer. Metropolitan Onuphry has very strong prayer. I am sure of this.”

That Ukraine is undergoing such serious testing, in the opinion of the Bulgarian bishop, “only proves that the Lord loves him.” Such ordeals do not mean God has abandoned the Ukrainian people but rather that He is guiding them towards eternal life. Met. Nicholas recalled the great number of saints and relics in Ukraine whose prayers cover the land with grace. He also emphatically stated that he believes the Lord gives grace to Met. Onuphry to bear his heavy cross.

“We pray that the Lord would grant your primate the grace of longevity, power, and strength, and that the grace of the Holy Spirit would strengthen him in his heavy service.”

A delegation from the Ukrainian Orthodox Church recently visited Bulgaria, including a visit to Plovdiv. His Beatitude Metropolitan Onufry of Kiev: “An Orthodox Christian Cannot Be a Pessimist”
In his interview with the Segodnya Ukrainian newspaper the primate of the Ukrainian Orthodox Church of the Moscow Patriarchate looks back on 2016. He speaks about proper prayer, how to avoid hatred, intrigues in the Church, expectations for the future, and his wishes for 2017. His Beatitude Metropolitan Onuphry: We pray before the relics of saints because they have the power of life
The righteous do not die—they live eternally.
Comments
×