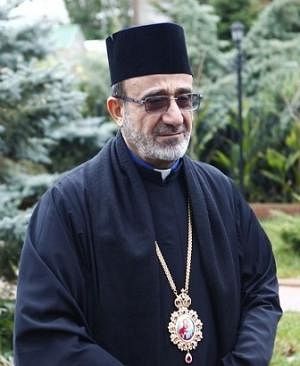 We support the canonical Church in Ukraine and pray that Philaret would come to his senses and return to its womb, says Bishop Qais (Sadiq) of Erzurum, vicar to Antiochian Patriarch John X, in an interview with the Synodal Education Department of the Ukrainian Orthodox Church.

On the question of what role the state plays in maintaining inter-confessional peace, Vladyka Qais answered: “The authorities have no right to put forward such accusations—evaluating their citizens, who among them is patriotic, who is not patriotic, in their opinion. If the authorities use such terms then divides society.”

According to him, consequences could include the dismembering of society, the destruction of the state, and the loss of the country itself. “With such means they themselves kill the spirit of patriotism and love for their motherland amongst their people,” said the hierarch.

Speaking on the Ukrainian schism, he noted: “This is all very regrettable—what has happened in Ukrainian Orthodoxy. We know about it. And especially regrettable is that the schism was perpetrated by a man who led the Church for many years, who in Communist times confronted various challenges. But in the end he himself struck a blow against his Church,” said Vladyka Qais. “I personally know the former Metropolitan Philaret. We often met at various international Church events before the schism which he perpetrated. I remember how we, being still students, sought to learn a lot from him. Unfortunately, all his many years of activities, all his work was ended by his schism.”

“We do not encourage or support any schisms but pray for the unity of the Church. We also consider that the autocephalous movement, if there is such a necessity, should be only undertaken in a canonical way, in accordance with Church canons and the generally accepted procedures. As an ancient Apostolic See the Antiochian Church supports the Ukrainian Orthodox Church. May God grant that Philaret would come to his senses and return to the canonical Church, so this schism could be healed the canonical way,” he said.

Speaking of the primate of the Ukrainian Orthodox Church, the Syrian hierarch noted: “Metropolitan Onufry is a simple man, but deep. There is a famous expression: ‘earthly angel and heavenly man’—this is Vladyka Onufry. I can add nothing more.”

The bishop also recalled that the Antiochian Church played a major role in the Baptism of Rus’, inasmuch as the first metropolitan of Kiev, Michael (end of the tenth century), was a native of Syria. “It means the historical Orthodox Church in Ukraine has a deep spiritual connection with our Church. We can say that Christianity arrived in Rus’ also thanks to the Antiochian Church,” he said.

“Therefore we are especially concerned that the Ukrainian Church would be one. The Ukrainian people deserve every respect and every kindness, and we pray that all would be well in your country,” said Vladyka Qais in closing. Christians are the Salt of Syria, and Will Remain in Our Land
Bishop Qais of Erzurum

Bishop Qais of Erzurum: Christians are the Salt of Syria, and Will Remain in Our Land
Natalia Goroshkova, Bishop Qais of Erzurum
Today the Church in Syria is going through a difficult period of persecutions. Churches, monasteries, convents, and cultural monuments are being destroyed, and people are being killed. In his interview with the Pravlife.org website Bishop Qais (Sadiq) of Erzurum, Vicar of His Beatitude Patriarch John X of Antioch, relates how the Church in Syria is trying to survive during the war. His Holiness Patriarch Kirill: Unilateral recognition of schism in Ukraine will have catastrophic consequences for the unity of the Orthodox Church
His Holiness reminded the participants in the meeting that last year the hierarchs of the abovementioned entities, ignoring His Beatitude Metropolitan Onufry of Kiev and All Ukraine, the canonical Primate of the Ukrainian Orthodox Church, visited Ukraine on repeated occasions and openly spoke in support of schismatics, promising them the recognition of their structure as an autocephalous Church and claiming that they act on behalf of His Holiness Patriarch Bartholomew of Constantinople.

Patriarch of Serbia expresses concern for discrimination against canonical Ukrainian Orthodox Church
Patriarch Irinej of Serbia
"With compassion and prayer the Serbian Orthodox Church is following the development of the conflict in Ptichya village in the Rovno Region, where our fellow faithful have become victims of pogroms and violence; where the Orthodox clergy are beaten up by unbridled fascist militants; where the weak elderly and women have been locked up in their own church for several days now without water and food, even without being provided with the necessary medical aid."
Comments

Anthony12/30/2016 10:05 pm
Amen. Now here are genuine words from a genuine Orthodox Christian. Unlike the nonsense spewing forth from Constantinople where one minute they support the canonical Church and the next minute they're examining documents proposing schism.
×