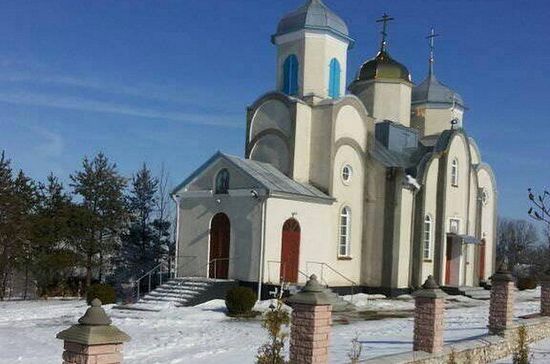 On the eve of Lent, when faithful Orthodox Christians were preparing to embark upon their journey of fasting, prayer, and almsgiving by beseeching and offering one another forgiveness, Ukrainian schismatics and their supporting right-wing radicals were busy trying to seize yet another parish of the Ukrainian Orthodox Church of the Moscow Patriarchate, reports Russian Line.

This time the target was Sts. Peter and Paul church in the village of Kynakhivtsi in the Ternopil region of western Ukraine. Believers were forced to stay in their church overnight to prevent the violent seizure of their temple by “Kiev Patriarchate” militants.

According to parish rector Fr. Vitaly Gurev, parishioners held their own meeting on February 25, but refused to attend the village meeting organized by the supporters of the pseudo-patriarch Filaret, declining to add weight to any vote that could take place there. The canonical faithful instead drafted a request to the president and prime minister of Ukraine asking for their rights as a religious community to be protected.

The Ternopil regional government has repeatedly resorted to the tactic of re-registering a parish’s charter under the “Kiev Patriarchate,” and other parishes, having lost their status as legal entity have filed suits in court. The faithful of Sts. Peter and Paul thus remained in the parish, rejecting the schismatic council to protect their charter that bears their names, passport information, and signatures.

Forty men attended the meeting of the “Kiev Patriarchate” militants, ten of which came from another village. Fr. Vitaly did attend with two parishioners to declare that they would not participate in the schismatics’ schemes.

The villagers report that when it became obvious that the people did not support transferring their parish to the uncanonical jurisdiction, the dissenters began to go throughout the village, trying to force residents to attend their meeting. However, even this tactic was unsuccessful and so villagers remain hopeful that their parish will remain Orthodox. 80 law-enforcement officers had to go to Pochayiv to maintain order
The police and the Security Service of the Ukraine are trying to find the people who spread the false information on a possible attempt to remove the wonder-working Pochayiv Icon of the Holy Theotokos from the Dormition Pochayiv Lavra and to replace it with a copy.
Comments
×