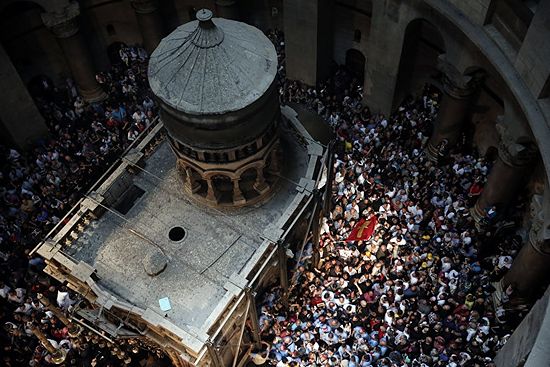 With some joyous news for the beginning of the Orthodox Great Lenten podvig, head of the Russian Spiritual Mission in Jerusalem Archimandrite Alexander (Elisov) has stated that the restoration work on the Edicule over the Holy Sepulchre, the Lord’s Tomb, will be completed in time for Pascha, reports RIA-Novosti.

Thus, the centuries-old tradition of the Orthodox patriarch of Jerusalem entering the Lord’s Tomb on Holy Saturday, prayerfully awaiting the Holy Fire from Heaven, will occur in the usual manner again this year. The rite of the Holy Fire attracts thousands of believers every year.

“All activities associated with the descent of the Holy Fire and the feast of Pascha for all confessions should be held on time and with the completion of the work,” Archimandrite Alexander said.

Pascha will be celebrated on April 16 this year, with the celebration of the Holy Fire occurring on April 15, while the Greek Orthodox Patriarchate in Jerusalem projects the work to be finished on March 22.

In its current form, the Edicule was built in 1810 in Jerusalem’s Church of the Holy Sepulchre, and with this current restoration work, the burial slab within the Tomb was removed for the first time in 500 years. Photos and videos from the opening of the Tomb can be seen here. Ancient Witnesses on the Church of the Holy Sepulchre
The church of the Holy Sepulchre in Jerusalem could be said to be the main church of holy Orthodox. The building includes both Golgotha where our Lord was crucified, and His holy grave, or sepulchre, where He rose again from the dead for the salvation of the world. As such, countless millions of pilgrims have traveled to the Holy Land to venerate the sites in this holy church, since its founding in 326 by the order of Emperor St. Constantine the Great, which is celebrated by the Orthodox Church every year on September 13/26.
Comments
×