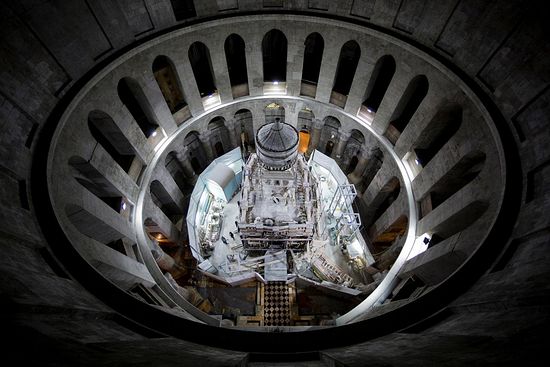 The shrine that houses the traditional burial place of Jesus Christ is undergoing restoration inside the Church of the Holy Sepulchre in Jerusalem. PHOTOGRAPH BY ODED BALILTY, AP FOR NATIONAL GEOGRAPHIC

For the first time in centuries, scientists have exposed the original surface of what is traditionally considered the tomb of Jesus Christ. Located in the Church of the Holy Sepulchre in the Old City of Jerusalem, the tomb has been covered by marble cladding since at least 1555 A.D., and most likely centuries earlier.

"The marble covering of the tomb has been pulled back, and we were surprised by the amount of fill material beneath it,” said Fredrik Hiebert, archaeologist-in-residence at the National Geographic Society, a partner in the restoration project. “It will be a long scientific analysis, but we will finally be able to see the original rock surface on which, according to tradition, the body of Christ was laid."

According to Christian tradition, the body of Jesus Christ was laid on a shelf or “burial bed” hewn from the side of a limestone cave following his crucifixion by the Romans in A.D. 30 or possibly 33. Christian belief says Christ was resurrected after death, and women who came to anoint his body three days after the burial reported that no remains were present.

This burial shelf is now enclosed by a small structure known as the Edicule (from the Latin aedicule, or "little house"), which was last reconstructed in 1808-1810 after being destroyed in a fire. The Edicule and the interior tomb are currently undergoing restoration by a team of scientists from the National Technical University of Athens, under the direction of Chief Scientific Supervisor Professor Antonia Moropoulou.

The exposure of the burial bed is giving researchers an unprecedented opportunity to study the original surface of what is considered the most sacred site in Christianity. An analysis of the original rock may enable them to better understand not only the original form of the tomb chamber, but also how it evolved as the focal point of veneration since it was first identified by Helena, mother of the Roman emperor Constantine, in A.D. 326.

"We are at the critical moment for rehabilitating the Edicule," Moropoulou said. "The techniques we're using to document this unique monument will enable the world to study our findings as if they themselves were in the tomb of Christ." 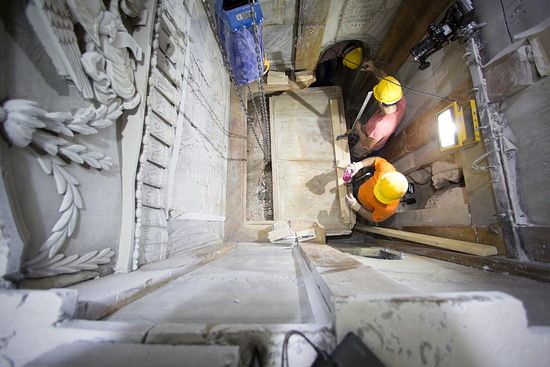 Workers begin removing the worn marble that has encased the original burial shelf for centuries, exposing a layer of fill material below. PHOTOGRAPH BY DUSAN VRANIC, AP FOR NATIONAL GEOGRAPHIC

The doors to the church were shut early—hours before normal closing time, leaving a bewildered crowd of pilgrims and tourists standing in front of the towering wooden doors. Inside, a scrum of conservators in yellow hard hats, Franciscans in simple brown robes, Greek orthodox priests in tall black hats, and Copts in embroidered hoods surrounded the entrance to the Edicule, peering into its reaches. Rising above all of them was the façade of the early 19th-century shrine, its elaborate carvings obscured by iron beams and orange safety tape.

Inside the tomb, which usually glows with a faint constellation of wax candles, bright construction lighting filled the small cell, revealing tiny details that are usually overlooked. The marble slab that covers the holy bench—roughly 3 by 5 feet and carved from creamy marble—had been pulled away from the wall. Beneath it was a grey-beige stone surface. What is it? a conservator was asked. "We don’t know yet," she replied. "It's time to bring in the scientific monitoring tools." 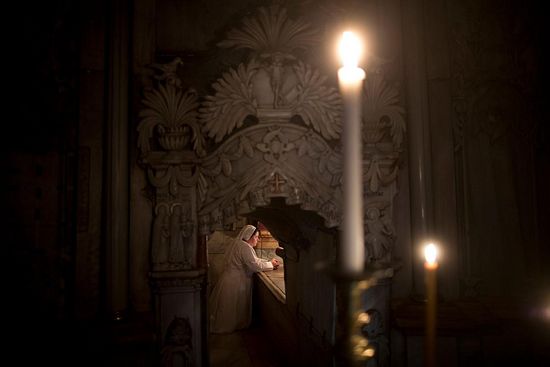 A Christian nun kneels in prayer at the "burial bed" of Christ inside the tomb shrine, known as the Edicule. PHOTOGRAPH BY ODED BALILTY, AP FOR NATIONAL GEOGRAPHIC


The Church of the Holy Sepulchre (also known as the Church of the Resurrection) is currently under the custody of six Christian sects. Three major groups—the Greek Orthodox Church, the Roman Catholic Church, and the Armenian Orthodox Church—maintain primary control over the site, and the Coptic, Ethiopian Orthodox, and Syriac communities also have a presence there. Parts of the church that are considered common areas of worship for all of the sects, including the tomb, are regulated by a Status Quo agreement that requires the consent of all of the custodial churches.

Outside the Edicule, Thephilos III, the Greek Patriarch of Jerusalem, stood watching the events with a serene smile. "I'm glad that the atmosphere is special, there is a hidden joy," said the patriarch. "Here we have Franciscans, Armenians, Greeks, Muslim guards, and Jewish police officers. We hope and we pray that this will be a real message that the impossible can become the possible. We all need peace and mutual respect."

The structural integrity of the early 19th-century Edicule has been a concern for decades. It suffered damage during a 1927 earthquake, and British authorities were forced to shore up the building in 1947 with unsightly exterior girders that remain to this day. Difficulties among the Status Quo representatives and a lack of financial resources have hindered its repair. 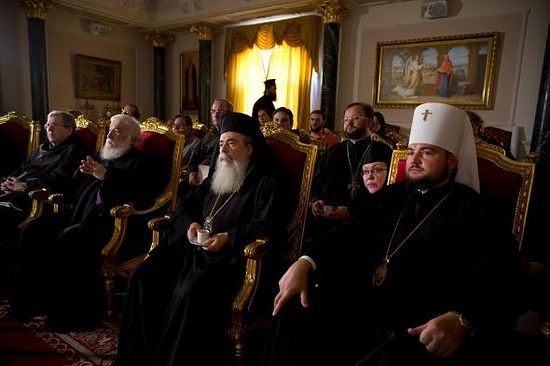 Church leaders listen to an update on the renovation work from Dr. Antonia Moropoulou, leader of the restoration team. PHOTOGRAPH BY ODED BALILTY, AP FOR NATIONAL GEOGRAPHIC

In 2015, the Greek Orthodox Patriarchate of Jerusalem, with the agreement of the other two major communities, invited the National Technical University of Athens (which had previously led restoration projects on the Athenian Acropolis and the Hagia Sophia) to study the Edicule. The communities of the Church of the Holy Sepulchre agreed to restore the structure in March 2016, with work to be completed by the spring of 2017. Major donors to the $4-million-plus project include a multi-million-dollar royal benefaction from Jordan's King Abdullah II, and $1.3-million gift from Mica Ertegun to the World Monuments Fund in support of the project.

The National Geographic Society, with the blessing of the Greek Patriarch of Jerusalem and the other religious communities, formed a strategic alliance with the National Technical University of Athens for cultural heritage preservation. For an exclusive look at the restoration project, watch Explorer on National Geographic Channel, coming in November. Archaeology Discovery: Rare Artifacts From Jesus' Time Found at Orphanage in Jerusalem
Along with discovering two houses at this site, archaeologists also discovered tools for harvesting grain, as well as red beads likely used for trade or jewelry. Archaeologists Discover Ancient Hebrew Slab Near Town Where Jesus Drove Out Demons
Historians have long believed that Kursi was inhabited either by Jews or early Christians, and the discovery, supervised by Prof. Michal Artzi of Haifa University and Dr. Haim Cohen with the Israel Antiquities Authority and the Israel Nature and Parks Authority, seems to confirm those ideas.

Archaeologists Identify First Century House Where Jesus May Have Lived
Archeologists in Nazareth say a first century house discovered in the 1880s could be the home of Mary and Joseph where Jesus was brought up.

Site of Jesus’s Trial May Have Been Uncovered in Jerusalem
Archaeologists have announced they may have uncovered the precise location of Jesus’s trial, and it’s not along the traditional Via Dolorosa path.
Comments
×