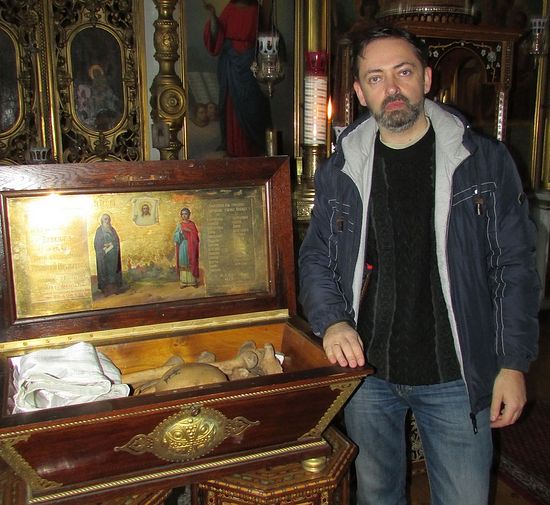 According to Sergei Shumilo, director of the International Institute of the Athonite Legacy in Ukraine, the relics of Elder Anikita (Prince Shirinskii-Shikhmatova, 1783-1837) were considered lost for twenty-five years. Great effort was put forth to discover their exact location on Mt. Athos, reports the Information-Education Department of the Ukrainian Orthodox Church.

According to Shumilo, the elder’s relics are honey-colored and emit a subtle but pleasant fragrance. The same is given in information about his relics in the sources of the nineteenth and early twentieth centuries. 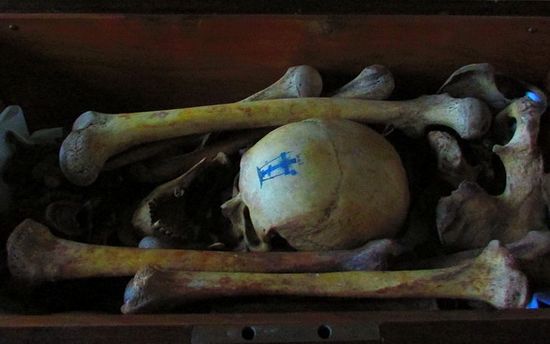 Photo: The Information Department of the Ukrainian Orthodox Church

The search for Elder Anikita’s relics was undertaken by Shumilo’s institute in preparation for the book Elder Anikita: The Spiritual Path of Holiness. The book project was blessed by Schema-Archimandrite, the recently-departed abbot of St. Paneteleimon’s Monastery on Mt. Athos.

Elder Anikita was a remarkable Athonite ascetic, and restored the St. Elijah Skete and St. Panteleimon’s Monastery in the nineteenth century.

“This outstanding Athonite ascetic is glorified not only for his prayerful podvig. Being a prince, he donated much to Orthodox monasteries and churches, in particular on Mt. Athos. By his efforts, a Slavic Brotherhood was restored to St. Panteleimon’s Monastery after a century-long break. Moreover, he was a talented author and poet. Before leaving for the Holy Mountain he labored for some time in the Dormition Monastery in Odessa. On Athos he was the companion of Elder Arsenios the Athonite. His relics were opened for veneration in 1875 and became known for many miracles,” noted Shumilo. Unknown manuscript of Elder Nikodim of Karoulia found on Mt. Athos
A previously unknown manuscript of beloved twentieth-century Athonite elder Nikodim of Karoulia has been discovered on Mt. Athos, reports director of the International Institute of the Athonite Legacy in Ukraine and editor of the anthology The Athonite Legacy Sergei Shumilo on his Facebook page.