Communion of the Taboric Light 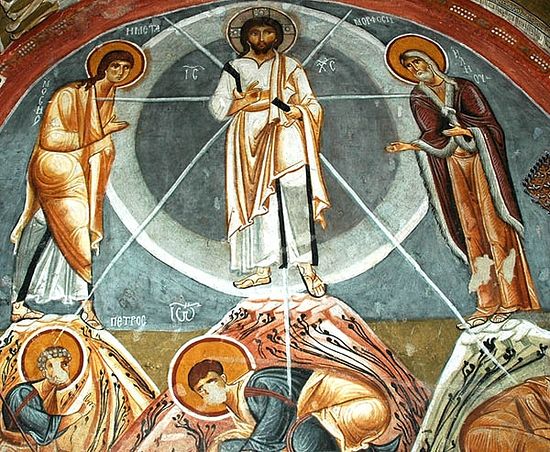 There are events seemingly out of season, but holy. Thus, St. Seraphim of Sarov foretold that Pascha would be celebrated in the summer at the transfer of his relics. And truly, bringing the saint’s relics to Diveyevo, the thousands of pilgrims in the crowd could not help giving voice to the Paschal hymns filling their hearts. Similarly, now, in the midst of March, we must move in thought to August 19.

And while the crowd was proceeding,
All of a sudden, someone stirred:
It was the sixth of August, meaning,
—the Transfiguration of Our Lord.[1]

We are compelled by the memory of St. Gregory Palamas, celebrated on the second Sunday of Lent, to reflect upon the Transfiguration. The life of St. Gregory can attract interest by its various details and events. For example, he was elected to the See of Thessaloniki by the direct intercession of the city patron—the Great Martyr Demetrios. “I take him as archbishop of my city,” St. Demetrios said to Great Martyr George, and the future archbishop was honored to hear the conversation of the glorious great martyrs in a nighttime vision. St. Gregory represented the part of the hierarchy that had more desire for a cell and books than for glory and vanity. It is only out of obedience and for the good of the people of God that such people take upon themselves with sorrow the yoke of administering their flock and the responsibility for many. Archpastorship was a cross all the heavier in that bishops, just as kings, were often deposed, banished, and confined in prisons. St. Gregory had to spend a year in captivity to Turkish pirates, where he preached to them the Gospel and came to the conclusion that the Greeks must immediately (!) begin to convert the Turks to Christianity. But all of this and many other sacred facts of his sacred biography fade into the background when we become acquainted with the main work of St. Gregory’s life—the dogma of the deification of man and the Taboric light.

Nobody specially prepared this question; it arose as if on its own, gradually signifying the genuine chasm between the distinct goals of life within Christianity and the various types of piety. It was precisely the feast of the Transfiguration that became the point of focus and the shield upon which their spears broke. What happened on Tabor? What did the Apostles see, and why did they see what they saw? Gregory’s opponents said that the light seen by the apostles is a special, enlightening light, but it is created light, like the sunlight that gives life to all nature.

St. Gregory, expressing the from thenceforth Orthodox dogma, and clothing in words the previously accrued but unformalized experience, spoke of the Uncreated Divine light. The Taboric light is not created, he said, but it is the light and grace of God Himself, manifested so that those communing of this light would not die, but be sanctified. Christ was not so much transfigured, says the Church, as Christ transfigured the vision and senses of the disciples, that they would be able to see Christ, as He is. This contemplation is a foretaste of the future Kingdom, of which is said, The glory of God did lighten it [the Heavenly Jerusalem], and the Lamb is the light thereof (Rev. 21:23). Therefore, it was said before the Transfiguration that there be some standing here, which shall not taste of death, till they see the kingdom of God (Lk. 9:27). There is nothing in all of created nature like the vision of the Kingdom of God that the apostles saw on Tabor. And therefore Moses, from Sheol, and Elijah, from Heaven, appeared to Christ, that the Law and Prophets would bow down to the Word become flesh, and this flesh deified at that.

In meaning and value, the feast of the Transfiguration is far beyond the bounds of being just one of the feasts, but gives meaning to all of life and communicates a purpose. The purpose is theosis. St. Peter says, Whereby are given unto us exceeding great and precious promises: that by these ye might be partakers of the Divine nature (2 Pt. 1:4). St. John says, Beloved, now are we the sons of God, and it doth not yet appear what we shall be: but we know that, when He shall appear, we shall be like Him; for we shall see Him as He is (1 Jn. 3:2). St. Peter and St. John were with Him on the holy mountain. St. John’s brother St. James was there as well, and he would have written about it too had he not become an early victim of Herod’s wickedness.[2]

Thus, we will see Him and will be like unto Him, changing because of this very vision and feeding upon grace, just as the angels feed upon it even now. To bring this feast to naught, to give it a private, local character instead of its semantic value, is, it would seem, impossible. However, Western religious thought does precisely that, not giving due deference to the Transfiguration and to the very idea of theosis. The Transfiguration is barely noticeable in the Catholic liturgical year, the teaching of St. Gregory is considered heretical, and the abyss in worldviews, which we spoke of in the beginning, has become practically impassable over time. The West tread the path of intellectualism. St. Gregory’s opponent—Barlaam—said that the vision of God is a mental perception of the Godhead, but in no way partakes of the eternal light or Uncreated energies. The East and West took different paths from this point.

The West, trusting the mind and for reasoning forsaking the main value, philosophized, speculated, and pondered questions until it lost faith itself and replaced grace with syllogisms. And we, being in a long Western captivity, absorbed and embodied all its mistakes.[3] We can criticize the West only as we rid ourselves of the disease of the West. Otherwise, such criticism will be suicidal. For centuries our seminarians and academics, priests and bishops neither heard nor spoke about what St. Gregory taught. That his memory was regularly celebrated on the second Sunday of Great Lent only emphasizes the bitterness of this. Hesychasm and the prayer of the heart, not finding a place in academies and seminaries, nestled into humble monasteries, where they continued to live the apostolic experience of the Taboric contemplation. This often happened without books, as the oral transfer of personal experience—that is, as genuine Tradition. St. Job of Pochaev spent many days in prayer in the stone caves, and the monks saw the tongues of flame, which did not burn, bursting forth from the entrance to this natural cell. St. Seraphim, beloved of all, the transfer of whose relics once brought Pascha in the middle of the summer, also partook of the Taboric light. He revealed this grace, as the fruit of long prayers and wise silence in God, to the eyes of Motovilov, and few are those Orthodox Christians who have not heard about it. St. Sergius would stand at Liturgy as if in fire, and fire would enter the chalice as he served, and of this fire he would partake. The best sons of our Church were practical exponents and fulfillers of Orthodox dogma, although few of them could theoretically interpret this dogma.

In conclusion, we can say that the divide between the East and West on the question of salvation is the difference between intellectualism and human righteousness on one side, and genuine holiness and a basic change in fallen nature on the other. But let’s note a few dangerous traps.

First, not all Orthodox participate in God’s grace in due measure. Confession of true doctrine is only an indication of the true path. But we must walk this path, not just point to it. Therefore, we do not need to boast. Second, the Western path of mental speculation is not that of an absolute impasse. They have discoveries and useful knowledge there. It is another matter that this path has an end and boundaries, beyond which it is not within their powers to go, and there begins the time for other labors and other podvigs. Just to disregard their knowledge, books, and reflections is a sin. St. Gregory, expressing the most exalted dogmas of the Church, was a very educated person. Those sciences, which he did not take as salvific, were respected by him and he was familiar with them to a due degree. In his youth he studied Aristotle, and at one of his lectures, read at the court, shouts rang out, “Aristotle himself, were he here, would not fail to praise it!” That is, it’s not rejecting external knowledge, but pointing to its limits that is characteristic of Orthodoxy.

Therefore, being at such a great distance from personal theosis, and in need firstly of cleansing, correction, and learning, we still know that the final purpose of human life is the transfiguration of our nature by grace and communion with the Divine life. On earth it is partial, in seed form, but in eternity it is different. Thus, to speak about it now is impossible.

[2] St. James was martyred by the wicked King Herod, as recorded in the book of Acts: Now about that time Herod the king stretched forth his hands to vex certain of the church. And he killed James the brother of John with the sword (12:1-2)—Trans.

[3] The extent of the so-called “Western captivity” is debatable. See the article The Theological Writings of Archbishop John and the Question of “Western Influence” in Orthodox Theology by Fr. Seraphim Rose for a good discussion of the matter.—Trans. St. Gregory Palamas: Traditionalist or Innovator?
Jesse Dominick
Although his theology was vindicated by several councils in Constantinople between 1341 and 1351, and he was canonized just nine years after his death in 1368, it remained a topic of disagreement. His theology and influence fell into nigh-obscurity from the late sixteenth century practically until the twentieth century, and today there is still disagreement within the Orthodox Church over how to understand his theology and interactions with his opponents, as well as continued debate from outside the Church. Second Sunday of Lent, St. Gregory Palamas
Archbishop Andrei (Rymarenko)
The triumph of Orthodoxy always starts in a person’s heart, and only afterwards is it expressed externally. True, sometimes there are cases when the external attracts the heart, as if waking it up. But for this to happen, there must be something in the heart, which makes such an awakening possible. God demands our heart. To serve God without heart, Orthodoxy without heart—this is the same as a man without heart.
Comments

Isaac Crabtree7/15/2020 5:52 pm
Western captivity’s extent is debatable, but not Fr. Andrei’s assertions about the lack of study of Palamas in Russian seminaries. Palamas does not even appear in Fr Michael Pomazansky’s Orthodox Dogmatic Theology, except in a footnote by the editors of the Third Edition.