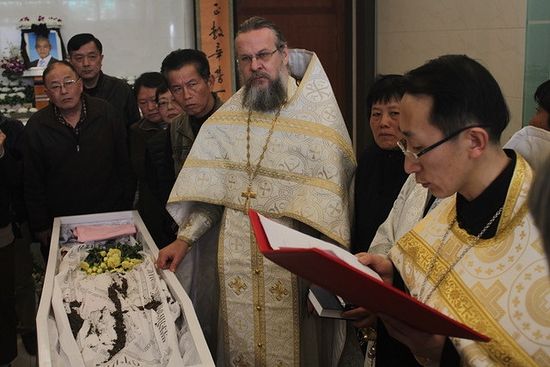 As previously reported, the last clergyman of the Orthodox mission in Beijing, Protodeacon Evangel Lu Yafu, passed away in his ninetieth year on March 5 in Shanghai following a long illness. On March 9, friends and relatives from Shanghai, Beijing, and other cities of China gathered to prayerfully say farewell to the faithful cleric, reports the Moscow Patriarchate’s Department of External Church Relations.

The funeral was celebrated by the rector of the Orthodox community in Shanghai Archpriest Alexei Kiselevich and rector of Holy Protection Church in Harbin Fr. Alexander Yui Shi. The condolences of His Holiness Patriarch Kirill and DECR chairman Metropolitan Hilarion of Volokolamsk were read in Russian and Chinese.

Lu Yafu was born April 21, 1927 in Beijing and was baptized in childhood. In 1950 he completed a one-year clergy training course of the Russian spiritual mission in China. Fr. Evangel was ordained in June 1950 by the head of the Russian mission Archbishop Viktor (Svyatin) of Peking and China in St. Innocent’s Church in Beiguan. In 1951 he was elevated to the rank of Protodeacon, but declined the dignity of the priesthood, considering himself unworthy.

He served in the Shanghai cathedral of the Mother of God “Surety of Sinners” until its closure in 1965. He was then sent to work in the city directorate for real estate, where he remained until retirement. In 2008, on the feast of Pentecost he was awarded the medal of St. Sergius of Radonezh (First Degree) by His Holiness Patriarch Alexei II, on the occasion of the fiftieth anniversary of the granting of autonomy to the Chinese Orthodox Church.

Protodeacon Evangel participated in his last Divine service on Nativity in 2016, being unable to serve after that due to his illness, although he continued to commune frequently until his death. Last cleric of Beijing Mission reposes in the Lord
The last clergyman of the Orthodox mission in Beijing, Protodeacon Evangel Lu, passed away on March 5 in Shanghai following a long illness.
Comments
×