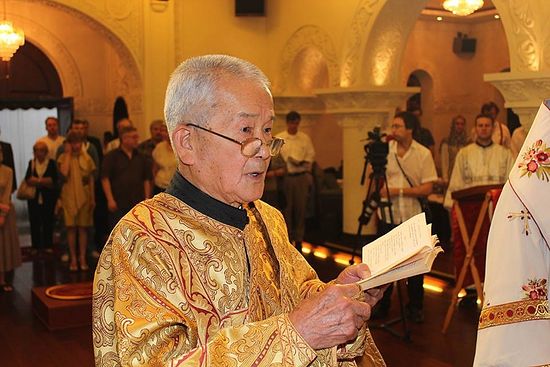 The last clergyman of the Orthodox mission in Beijing, Protodeacon Evangel Lu, passed away on March 5 in Shanghai following a long illness, reports Fr. Dionysius Pozdnyaev, a Russian priest serving at the Sts. Peter and Paul Church in Tung Chung, Hong Kong.

Fr. Dionysius writes of him:

Father Evangel was ordained to the diaconate in 1950 by the Head of the Russian Ecclesiastical Mission for China, Archbishop of Beijing Victor (Svyatin). Fr. Evangel lived in Shanghai as a retired clergyman, taking part in the divine worship of the Orthodox community, also during recent visits to China of Holiness Patriarch Kirill and Metropolitan Hilarion of Volokolamsk. In 2008, Fr. Evangel was awarded the Medal of St. Sergius of Radonezh on the occasion of the anniversary of the Chinese Autonomous Orthodox Church. The memory of the departed Protodeacon Evangel as one of the confessors of the faith will remain in the hearts of all those who knew him, the Shanghai Orthodox community and the flock of the Chinese Autonomous Orthodox Church.

The Beijing Orthodox mission was founded in 1712 by the mutual agreement of Tsar Peter I and Emperor Kangxi, serving as the spiritual center of the Orthodox Church in China until the 1950s. In 1956, the Russian Orthodox Church granted autonomy to the Chinese Church, with more than 100 churches at that time. The Russian Church estimates that there are now about 13,000 Orthodox Christians in China.

May God grant Protodeacon Evangel’s memory to be eternal! Exhibition “Orthodoxy in China” opens in Hong Kong
According to the organizers of the exhibition, it “aims to show ‘Orthodoxy with a Chinese face,’ and is timed to several important dates—300 years of the Russian Orthodox mission, 330 years since the arrival of the first Orthodox priest in China, and 60 years since the formation of the Chinese Orthodox Autonomous Church.”