Repose of St Nikolai of Zhicha 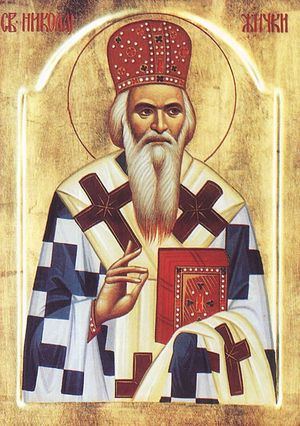 Saint Nikolai of Zhicha, “the Serbian Chrysostom,” was born in Lelich in western Serbia on January 4, 1881 (December 23, 1880 O.S.). His parents were Dragomir and Katherine Velimirovich, who lived on a farm where they raised a large family. His pious mother was a major influence on his spiritual development, teaching him by word and especially by example. As a small child, Nikolai often walked three miles to the Chelije Monastery with his mother to attend services there.

Sickly as a child, Nikolai was not physically strong as an adult. He failed his physical requirements when he applied to the military academy, but his excellent academic qualifications allowed him to enter the Saint Sava Seminary in Belgrade, even before he finished preparatory school.

After graduating from the seminary in 1905, he earned doctoral degrees from the University of Berne in 1908, and from King’s College, Oxford in 1909. When he returned home, he fell ill with dysentery. Vowing to serve God for the rest of his life if he recovered, he was tonsured at the Rakovica Monastery on December 20, 1909 and was also ordained to the holy priesthood.

In 1910 he went to study in Russia to prepare himself for a teaching position at the seminary in Belgrade. At the Theological Academy in Saint Petersburg, the Provost asked him why he had come. He replied, “I wanted to be a shepherd. As a child, I tended my father’s sheep. Now that I am a man, I wish to tend the rational flock of my heavenly Father. I believe that is the way that has been shown to me.” The Provost smiled, pleased by this response, then showed the young man to his quarters.

After completing his studies, he returned to Belgrade and taught philosophy, logic, history, and foreign languages at the seminary. He spoke seven languages, and this ability proved very useful to him throughout his life.

Saint Nikolai was renowned for his sermons, which never lasted more than twenty minutes, and focused on just three main points. He taught people the theology of the Church in a language they could understand, and inspired them to repentance.

At the start of World War I, Archimandrite Nikolai was sent to England on a diplomatic mission to seek help in the struggle of the Serbs against Austria. His doctorate from Oxford gained him an invitation to speak at Westminster Abbey. He remained in England for three short months, but Saint Nikolai left a lasting impression on those who heard him. His writings “The Lord’s Commandments,” and “Meditations on the Lord’s Prayer” impressed many in the Church of England.

Archimandrite Nikolai left England and went to America, where he proved to be a good ambassador for his nation and his Church.

The future saint returned to Serbia in 1919, where he was consecrated as Bishop of Zhicha, and was later transferred to Ochrid. The new hierarch assisted those who were suffering from the ravages of war by establishing orphanages and helping the poor.

Bishop Nikolai took over as leader of Bogomljcki Pokret, a popular movement for spiritual revival which encouraged people to pray and read the Bible. Under the bishop’s direction, it also contributed to a renewal of monasticism. Monasteries were restored and reopened, and this in turn revitalized the spiritual life of the Serbian people.

In 1921, Bishop Nikolai was invited to visit America again and spent two years as a missionary bishop. He gave more than a hundred talks in less than six months, raising funds for his orphanages. Over the next twenty years, he lectured in various churches and universities.

When Germany invaded Yugoslavia on April 6, 1941, Bishop Nikolai, a fearless critic of the Nazis, was arrested and confined in Ljubostir Vojlovici Monastery. In 1944, he and Patriarch Gavrilo were sent to the death camp at Dachau. There he witnessed many atrocities and was tortured himself. When American troops liberated the prisoners in May 1945, the patriarch returned to Yugoslavia, but Bishop Nikolai went to England.

The Communist leader Tito was just coming to power in Yugoslavia, where he persecuted the Church and crushed those who opposed him. Therefore, Bishop Nikolai believed he could serve the Serbian people more effectively by remaining abroad. He went to America in 1946, following a hectic schedule in spite of his health problems which were exacerbated by his time in Dachau. He taught for three years at Saint Sava’s Seminary in Libertyville, IL before he settled at Saint Tikhon’s Monastery in South Canaan, PA in 1951.

He taught at Saint Tikhon’s and also served as the seminary’s Dean and Rector. He was also a guest lecturer at Saint Vladimir’s Seminary in NY, and at Holy Trinity Monastery in Jordanville, NY.

On Saturday March 17, 1956 Bishop Nikolai served his last Liturgy. After the service he went to the trapeza and gave a short talk. As he was leaving, he bowed low and said, “Forgive me, brothers.” This was something unusual which he had not done before.

On March 18, 1956 Saint Nikolai fell asleep in the Lord Whom he had served throughout his life. He was found in his room kneeling in an attitude of prayer. Though he was buried at Saint Sava’s Monastery in Libertyville, IL, he had always expressed a desire to be buried in his homeland. In April of 1991 his relics were transferred to the Chetinje Monastery in Lelich. There he was buried next to his friend and disciple Father Justin Popovich (+ 1979).

English readers are familiar with Saint Nikolai’s PROLOGUE FROM OCHRID, THE LIFE OF ST SAVA, A TREASURY OF SERBIAN SPIRITUALITY, and other writings which are of great benefit for the whole Church. He thought of his writings as silent sermons addressed to people who would never hear him preach. In his life and writings, the grace of the Holy Spirit shone forth for all to see, but in his humility he considered himself the least of men.

Though he was a native of Serbia, Saint Nikolai has a universal significance for Orthodox Christians in all countries. He was like a candle set upon a candlestick giving light to all (MT 5:15). A spiritual guide and teacher with a magnetic personality, he attracted many people to himself. He also loved them, seeing the image of God in each person he met. He had a special love for children, who hastened to receive his blessing whenever they saw him in the street.

He was a man of compunctionate prayer, and possessesed the gift of tears which purify the soul (Saint John Climacus, LADDER, Step 7). He was a true pastor to his flock protecting them from spiritual wolves, and guiding them on the path to salvation. He has left behind many soul-profiting writings which proclaim the truth of Christ to modern man. In them he exhorts people to love God, and to live a life of virtue and holiness. May we also be found worthy of the Kingdom of Heaven through the prayers of Saint Nikolai, and by the grace of our Lord Jesus Christ, to Whom be glory forever. Amen.

O golden-tongued preacher proclaiming the risen Christ, / Everlasting guide of the cross-bearing Serbian people, / Resounding harp of the Holy Spirit, and dear to monastics who rejoice in you, / Pride and boast of the priesthood, teacher of repentance, master for all nations, / Guide of those in the army of Christ as they pray to God, / Holy Nikolai teacher in America and pride of the Serbian people, / With all the saints, implore the only Lover of mankind / To grant us peace and joy in his heavenly kingdom!

In truth you were revealed to your flock as a rule of faith, / an image of humility and a teacher of abstinence; / your humility exalted you; your poverty enriched you. / Hierarch Father Nikolai, / entreat Christ our God / that our souls may be saved.

Born at Lelich in Serbia, / you served as archpastor at the church of Saint Nahum in Ochrid. / You presided on the throne of Saint Sava at Zhicha, / teaching the people of God and enlightening them with the Gospel, / bringing them to repentance and love for Christ. / And for His sake you endured suffering at Dachau. / Therefore, Nicholai, we glorify you as one newly well pleasing to God. The Final Years of St. Nikolai Velimirovich
Bishop Nikolai's classes, sermons and conversations were always geared to his audience, whether they be students, professors, theologians or simple parishioners, and his vocabulary never extended itself beyond the comprehension of his hearers. For him, class could be any time. Anything said to him could be turned around and assigned a deeper meaning. He would always take examples from conversations in class, at the dinner table, or that which occurred as he walked about the grounds, and would always introduce examples from Holy Scripture, relating them to life at hand.

Bishop Nikolai Velimirovich: Serbia's New Chrysostom
While the mere facts of Bishop Nikolai's life inspire awe, such a skeletal portrait does not explain his spiritual magnetism and the soul-penetrating power of his writings. These were the fruit of his life-long striving to know and to serve the Truth, which, in turn, kindled a habit of ceaseless prayer and a practiced consciousness of continually abiding in the presence of God.
Comments

Rejoice. And I say again Rejoice.
×