On the Veneration of the Cross 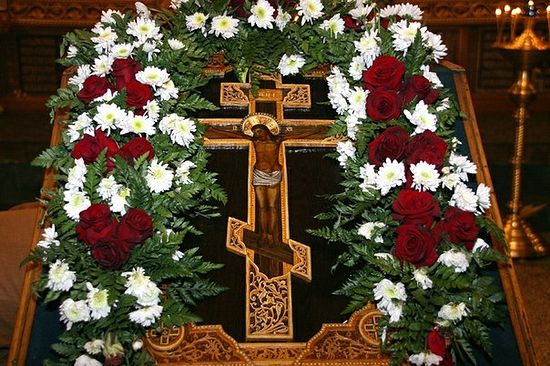 The word “Cross” is foolishness to those that perish, but to us who are saved it is the power of God (1 Corinthians 1:23). For he that is spiritual judges all things, but the natural man receives not the things of the Spirit. For it is foolishness to those who do not receive in faith and who do not consider God's goodness and omnipotence, but search out divine things with human and natural reasonings. For all the things that are of God are above nature and reason and conception. For should any one consider how and for what purpose God brought all things out of nothing and into being, and aim at arriving at that by natural reasonings, he fails to comprehend it. For knowledge of this kind belongs to spirits and demons. But if any one, under the guidance of faith, should consider the divine goodness and omnipotence and truth and wisdom and justice, he will find all things smooth and even, and the way straight. But without faith it is impossible to be saved (Hebrews 11:6). For it is by faith that all things, both human and spiritual, are sustained. For without faith neither does the farmer cut his furrow, nor does the merchant commit his life to the raging waves of the sea on a small piece of wood, nor are marriages contracted nor any other step in life taken. By faith we consider that all things were brought out of nothing into being by God's power. And we direct all things, both divine and human, by faith. Further, faith is assent free from all meddlesome inquisitiveness.

Every action, therefore, and performance of miracles by Christ are most great and divine and marvelous: but the most marvelous of all is His precious Cross. For no other thing has subdued death, expiated the sin of the first parent, despoiled Hades, bestowed the resurrection, granted the power to us of contemning the present and even death itself, prepared the return to our former blessedness, opened the gates of Paradise, given our nature a seat at the right hand of God, and made us the children and heirs of God, save the Cross of our Lord Jesus Christ. For by the Cross all things have been made right. So many of us, the apostle says, as were baptized into Christ, were baptized into His death Romans 6:3, and as many of you as have been baptized into Christ, have put on Christ. Galatians 3:27 Further, Christ is the power of God and the wisdom of God (1 Corinthians 1:24). Lo! The death of Christ, that is, the Cross, clothed us with the enhypostatic wisdom and power of God. And the power of God is the Word of the Cross, either because God's might, that is, the victory over death, has been revealed to us by it, or because, just as the four extremities of the Cross are held fast and bound together by the bolt in the middle, so also by God's power the height and the depth, the length and the breadth, that is, every creature visible and invisible, is maintained.

This was given to us as a sign on our forehead, just as the circumcision was given to Israel: for by it we believers are separated and distinguished from unbelievers. This is the shield and weapon against, and trophy over, the devil. This is the seal that the destroyer may not touch you (Exodus 12:23), as says the Scripture. This is the resurrection of those lying in death, the support of the standing, the staff of the weak, the rod of the flock, the safe conduct of the earnest, the perfection of those that press forwards, the salvation of soul and body, the aversion of all things evil, the patron of all things good, the taking away of sin, the plant of resurrection, the tree of eternal life.

So, then, this same truly precious and august tree, on which Christ has offered Himself as a sacrifice for our sakes, is to be worshipped as sanctified by contact with His holy body and blood; likewise the nails, the spear, the clothes, His sacred tabernacles which are the manger, the cave, Golgotha, which brings salvation, the tomb which gives life, Sion, the chief stronghold of the churches and the like, are to be worshipped. In the words of David, the father of God, We shall go into His tabernacles, we shall worship at the place where His feet stood. And that it is the Cross that is meant is made clear by what follows, Arise, O Lord, into Your Rest. For the resurrection comes after the Cross. For if of those things which we love, house and couch and garment, are to be longed after, how much the rather should we long after that which belonged to God, our Savior, by means of which we are in truth saved.

Moreover we worship even the image of the precious and life-giving Cross, although made of another tree, not honoring the tree (God forbid) but the image as a symbol of Christ. For He said to His disciples, admonishing them, Then shall appear the sign of the Son of Man in Heaven Matthew 24:30, meaning the Cross. And so also the angel of the resurrection said to the woman, You seek Jesus of Nazareth which was crucified (Mark 16:6). And the Apostle said, We preach Christ crucified (1 Corinthians 1:23). For there are many Christs and many Jesuses, but One crucified. He does not say speared but crucified. It behooves us, then, to worship the sign of Christ. For wherever the sign may be, there also will He be. But it does not behoove us to worship the material of which the image of the Cross is composed, even though it be gold or precious stones, after it is destroyed, if that should happen. Everything, therefore, that is dedicated to God we worship, conferring the adoration on Him.

The tree of life which was planted by God in Paradise pre-figured this precious Cross. For since death was by a tree, it was fitting that life and resurrection should be bestowed by a tree. Jacob, when He worshipped the top of Joseph's staff, was the first to image the Cross, and when he blessed his sons with crossed hands (Hebrews 11:21) he made most clearly the sign of the cross. Likewise also did Moses' rod, when it smote the sea in the figure of the cross and saved Israel, while it overwhelmed Pharaoh in the depths; likewise also the hands stretched out crosswise and routing Amalek; and the bitter water made sweet by a tree, and the rock rent and pouring forth streams of water (Numbers 20), and the rod that meant for Aaron the dignity of the high priesthood (Exodus 4): and the serpent lifted in triumph on a tree as though it were dead, the tree bringing salvation to those who in faith saw their enemy dead, just as Christ was nailed to the tree in the flesh of sin which yet knew no sin. The mighty Moses cried, You will see your life hanging on the tree before your eyes, and Isaiah likewise, I have spread out my hands all the day unto a faithless and rebellious people (Isaiah 65:2). But may we who worship this obtain a part in Christ the crucified. Amen.

From An Exposition of the Orthodox Faith, Book IV, Chapter 11: Concerning the Cross and here further concerning Faith. Sermon for the Sunday of the Cross

Sermon for the Sunday of the Cross
But outside of our Orthodox Churches we are increasingly encountering a new Christianity which presents us with a new version of Christianity, a new Gospel … a Christianity without the Cross. A Pascha with no Good Friday. How pleasant this appears to the world and how much it is attracting followers. Thy Life Hanging Before Thee

Thy Life Hanging Before Thee
Fr. John Whiteford
In Deuteronomy 28:66-67, Moses talks about fearing the day and night. What all is going on there? Verse 66 is quoted in the hymns for the feast of the Exaltation of the Cross, as Christ our Life hanging before our eyes, but what does the rest of the verse mean? Fr. John Whiteford talks about this verse so pertinent to the Sunday of the Cross. The Cross in Our Life
His Eminence Metropolitan Joseph

The Cross in Our Life
His Eminence Metropolitan Joseph
Many heretics of our time don’t believe in the cross, even if they may call themselves Christians. Some pop stars and actors wear the cross, but by the witness of their lives we can assume that they don’t put much value in the cross except as an empty symbol.
Comments
×