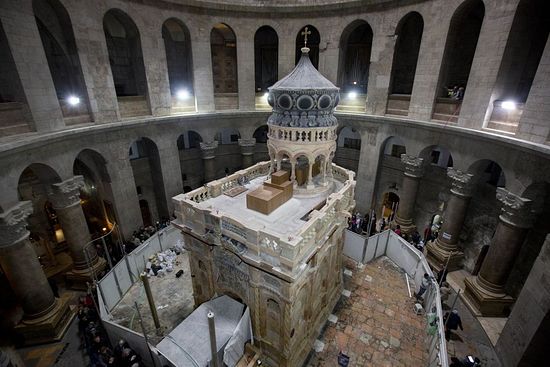 Photo: The Times of Israel

The restoration work on the edicule over the Lord’s tomb has been completed according to the previously announced schedule. Earlier, His Holiness Patriarch Theophilos of Jerusalem stated that the tomb would open to pilgrims sometime between March 22 and 25.

The iron cage built around the Holy Sepulchre in 1947 by British authorities has been removed, as the walls of the edicule have been reinforced to be self-sustaining, reports The Times of Israel. The black soot on the stone façade from years of pilgrims’ candles was also cleaned as part of the first restoration work in 200 years. “If this intervention hadn’t happened now, there is a very great risk that there could have been a collapse,” Bonnie Burnham of the World Monuments Fund, which gave the initial $1.4 million for the $4 million project, said Monday. “This is a complete transformation of the monument.”

The shrine, standing in the middle of the ancient church, was in bad condition after years of water, humidity, and candle smoke. The National Technical University of Athens’ restoration team removed the stone slabs from the edicule’s façade, and cleaned and replaced them, reinforcing the walls with tubes of grout and titanium bolts.

Restorers also cut a small window through the edicule’s marble walls for pilgrims to see into the tomb itself, where Christ was laid after His Crucifixion and death on Holy Friday.

While historians believed the original remnants of the tomb had been destroyed over the centuries, with the original church being destroyed in 1099 by order of the Fatimid caliph of Egypt, researchers in fact found a limestone slab with a cross carved into it that dated to the fourth century, to the time when Sts. Constantine and Helen had the original Holy Sepulchre Church built.

Further restorations are planned to consolidate the underground drainage and sewage pipes and to stabilize the shrine’s foundation.

The restoration team’s worksite is being dismantled in preparation for a ceremony on Wednesday to mark the end of the restorations to be led by His All-Holiness Ecumenical Patriarch Bartholomew and Pope Francis of the Roman Catholic confession. Edicule over Holy Sepulchre to open March 22-25
The edicule over the Tomb of the Lord will open for pilgrims somewhere between March 22 and 25, following the completion of restoration, stated Patriarch Theophilos of Jersalem at a meeting with the St. Andrew the First-Called Foundation in Jerusalem. Restoration of Holy Sepulchre to be done in time for Holy Fire and Pascha
In its current form, the Edicule was built in 1810 in Jerusalem’s Church of the Holy Sepulchre, and with this current restoration work, the burial slab within the Tomb was removed for the first time in 500 years.

Patriarch of Jerusalem: no sacrilege in opening Lord’s tomb; believer should not seek for signs
“The fact is that restoration has been ongoing in the Church of the Holy Sepulchre for many years already; the only part of the church that remained untouched was the Edicule, which therefore was in need of restoration, particularly of the burial cave of Christ, that is the Holy Sepulchre.”
Comments
×