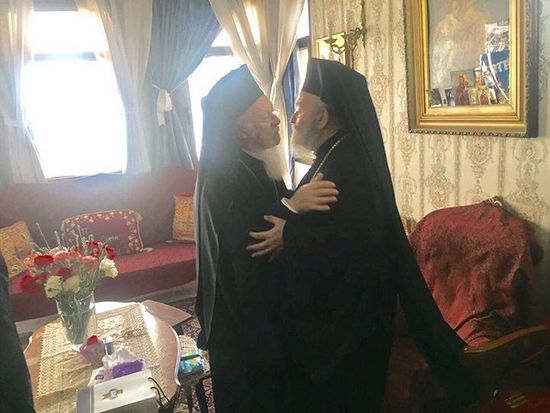 Ecumenical Patriarch Bartholomew visited the deposed Patriarch Irenaios of Jerusalem for the first time during his visit to Jerusalem yesterday, March 22. His All-Holiness arrived in Jerusalem to attend the consecration of the newly-renovated Edicule over the Tomb of the Lord in the Church of the Resurrection.

According to Romfea, the patriarch of Constantinople visited the former patriarch of Jerusalem in his apartment in the building of the Jerusalem Patriarchate, where he has lived in seclusion for several years after his deposition from the patriarchal throne.

The two “exchanged an embrace of love and reconciliation” upon Patriarch Bartholomew’s entrance, and proceeded to have a “brotherly and cordial discussion on all matters.”

Accused of dubious real estate transactions and conflicts with Israeli, Palestinian, Syrian, and Greek authorities, Patriarch Irenaios was removed from office in 2005 when twelve of the eighteen bishops of the Holy Synod of the Jerusalem Patriarchate signed a demand of deposition. He took up residence in the patriarchate from February 16, 2008, leaving for the first time in November 2015. He claims he has been forcibly kept in the patriarchate, while the Church maintains that he has placed himself in voluntary seclusion.

On November 3, 2015, the former patriarch underwent a successful hernia operation. On November 5, Patriarch Theophilos went to visit him in the hospital. Then one year ago, on March 22, 2016 Patriarch Irenaios attended a reception to congratulate Patriarch Theophilos on his name’s day, giving rise to speculation that some kind of official reconciliation may be coming.

Chapel over the Lord’s tomb consecrated after restoration (+ VIDEO)
A ceremony of consecration of the newly-restored and opened edicule over the Lord’s Tomb in Jerusalem was celebrated today by His Beatitude Patriarch Theophilos of Jerusalem. Restoration of Holy Sepulchre completed
The restoration work on the edicule over the Lord’s tomb has been completed according to the previously announced schedule.

Patriarch of Jerusalem: no sacrilege in opening Lord’s tomb; believer should not seek for signs
“The fact is that restoration has been ongoing in the Church of the Holy Sepulchre for many years already; the only part of the church that remained untouched was the Edicule, which therefore was in need of restoration, particularly of the burial cave of Christ, that is the Holy Sepulchre.”
Comments

Anthony3/23/2017 8:25 pm
Do we have any more intel on the purpose of the Phanars visit to the former patriarch. Given the Phanars increasingly erratic and heretical behaviour, there must be more to this meeting than meets the eye. Questions, questions inquiring minds need to know. Please post more info or intel via Pravoleaks as it becomes available.

Demetrius Manolakos, Archon3/23/2017 7:49 pm
Forgiveness is a must. Let there be love amongst all, especially the hierarchy.
×