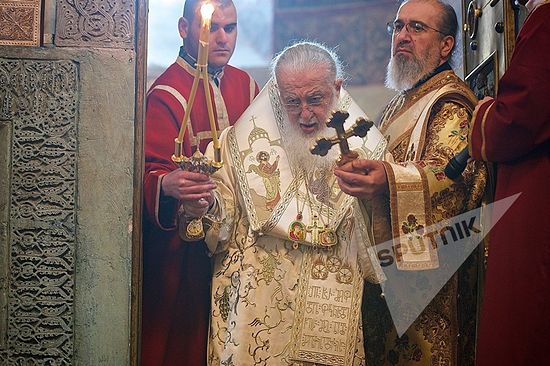 A festive service was celebrated on March 25 in Mtskheta’s Svetitskhoveli Cathedral, northeast of the capital city of Tbilisi, in celebration of the 100th anniversary of the restoration of the Georgian Orthodox Church’s ancient autocephaly. The Divine Liturgy was led by His Holiness Catholicos-Patriarch Ilia II, the most trusted man in the nation. Celebratory services were also held in all churches across the nation, reports Sputnik Georgia.

In his homily, the Georgian primate declared his great gratitude to the Lord. “The Georgian Church gained autocephaly in the fifth century. Much of the credit for this belongs to King Vakhtang Gorgasali. With the blessing of the Patriarch of Jerusalem, Peter was proclaimed the first Georgian Catholicos. What would Georgia be if we didn’t have autocephaly? It’s hard to imagine, but we thank the Lord that He desired to establish autocephaly in Georgia. The churches that were built, the books that were written, the culture created upon the soil of Christianity—it’s all a result of our autocephaly, and I congratulate you on the restoration of our autocephaly,” His Holiness stated. “It was abolished and restored one hundred years ago,” he continued.

The receiving and restoration of the Georgian Orthodox Church’s autocephaly are historical dates higher than mere historical events, according to the patriarch. After the sermon, the Catholicos-Patriarch of all Georgia served a memorial service for Georgian ancestors who served the people, the country and the Church. 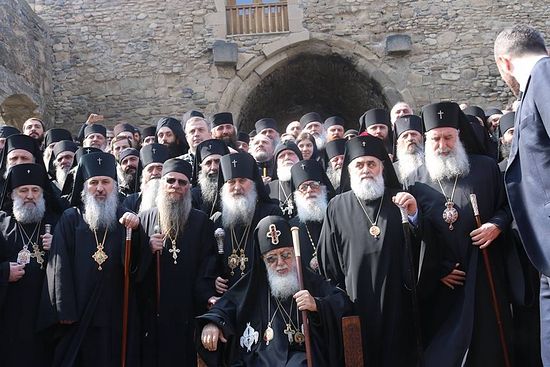 After the service, an historical photo was taken in the courtyard of the cathedral with the patriarch, around thirty other bishops, clergy, monastics, and gathered faithful. A similar photo was taken a hundred years ago on the day of the restoration of the Church’s autocephaly.

The night before a conference was held in honor of the centenary in the Georgian Parliament which was attended by President Giorgi Margvelashvili, Prime Minister Giorgi Kvirikashvili, and other government representatives, as well as representatives of the diplomatic corps, the Holy Synod of the Georgian Orthodox Church, including Patriarch Ilia, and other religious denominations.

President Giorgi Margvelashvili spoke of the intertwining of the identity and history of Georgia with the Georgian Orthodox Church. “The identity of Georgia and the ancient history of our people from the beginning to the end have been bound with our Church. The manifestation of our identity began when Georgia adopted Christianity. Our Orthodox faith and state were under attack for centuries, but we always preserved our identity along with our religion,” the head of state declared. 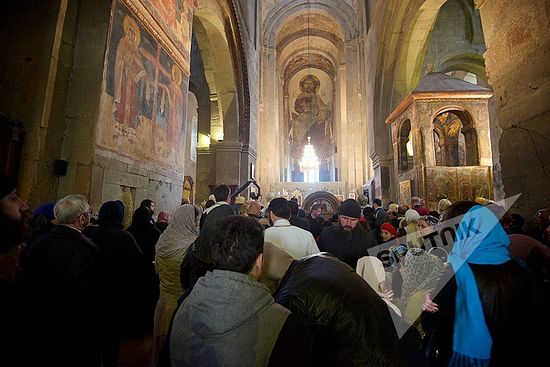 Prime Minister Kvirikashvili noted that the Georgian Orthodox Church has provided the people’s spiritual food for many centuries. “On this day [March 25, 1917—ed.] historical justice was restored. We returned the Mother Church, in whose womb our ancestors and spiritual fathers have preserved for us our revered religion, and the values on which our nation and our country stand. Precisely in the Church was the spiritual food of the Georgians, our spiritual treasure,” Kvirikashvili said.

The prime minister especially highlighted the great contribution of Catholics-Patriarch of All Georgia Ilia II, noting that he has many times spoken up in defense of the nation in hard times. He also highlighted that at the same that the nation is celebrating the centenary of the renewal of the Church’s autocephaly, it is also celebrating the eighty-fifth birthday of the patriarch, and his fortieth year as primate of the Georgian Orthodox Church.

For his part, Georgian Parliament Chairman Irakli Kobakhidze noted the Church’s important role in the country’s struggle for independence: “The restoration of the Georgian Orthodox Church’s autocephaly in 1917 came one year before the Act of the Restoration of the Independence of Georgia. These dates make it obvious that the Georgian Church was always on the forefront of the struggle for Georgia’s freedom.”

He also spoke of the Church’s role in the Soviet period, which he said “confirms once again that it’s impossible to destroy something that is based on love of neighbor, freedom, and patriotism.” He also noted the “immeasurable” contribution of His Holiness Patriarch Ilia II to the freedom and revival of Georgia.

The Russian Imperial court abolished the Georgian Church’s autocephaly and patriarchate in 1811, subordinating it as an exarchate of the Russian Synod. After the restoration of autocephaly in 1917, Kirion II was elected the first Catholicos-Patriarch. Georgian Orthodox Church is supported by 91% of respondents
Results of the new survey research carried out by the International Republican Institute (IRI) in Georgia have been published.
Comments

Colin Lemr3/4/2020 5:03 pm
Its tragically unfortunate that the Russian Church uncanonically absorbed and dissolved the Georgian Church in 1811 following a militart conquest, and the rest of the Orthodox world accepted this and justified the Russian Church for doing so. Thankfully, this is in the past but it is a shameful event in Christian history which should never be repeated again.

Fr John 3/30/2017 8:48 pm
Catholicos Kirion II was later mirdered by Bolsheviks who then smeared him as a graceless suicide.

"Blessed are ye when men shall revile you and persecute you and do all manner of evil against you falsely for My sake. Rejoice and be exceedingly glad, for great is your reward in heaven."
×