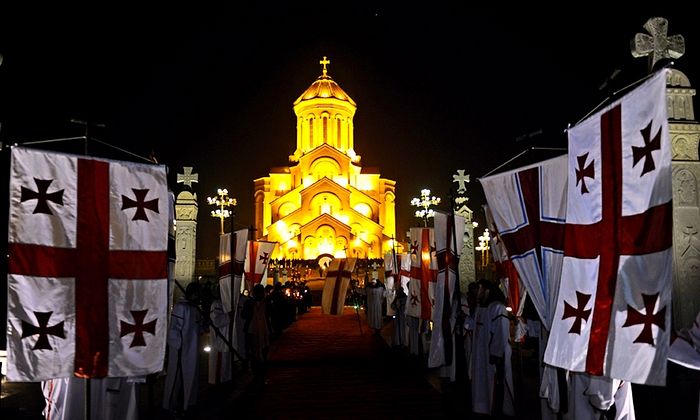 A recent poll conducted by the National Democratic Institute (NDI) and the Caucus Research Resource Center-Georgia has once again demonstrated the Georgian Orthodox Church’s return to prominence as Georgian society leaves behind the atheist-soviet period.

Georgians’ loyalty to the Church and their traditional values was shown to impact areas of their life beyond simple church attendance. According to Georgia Today, of the 3,900 respondents questioned between February 23 and March 14, 74 percent testified that they would not vote in the upcoming October 8 elections for parties seen as critical to the Church, headed by the much-loved Patriarch-Catholicos Ilia II.

This recent poll shows similar results to an April 2015 NDI poll which showed that Patriarch Ilia enjoyed the highest approval rating—87 percent—of any public figure, while a 2014 International Republican Institute poll showed that the Church itself was the most trusted and supported social institution in Georgia, with 94 percent of the vote. Ukrainians trust Church the most - poll

Ukrainians trust Church the most - poll
A poll conducted by the company Research & Branding Group shows that the church is at the top of the rating of administrative and societal institutions that are trusted by people in Ukraine the most. Poll shows population of Georgia most confident in the Church
According to the Imedi television company, the research carried out by the International Republican Institute (IRI), showed that the Georgian Orthodox Church enjoyed the highest level of confidence among state, political and public institutions in Georgia: 94% of respondents trust it.
Comments
×