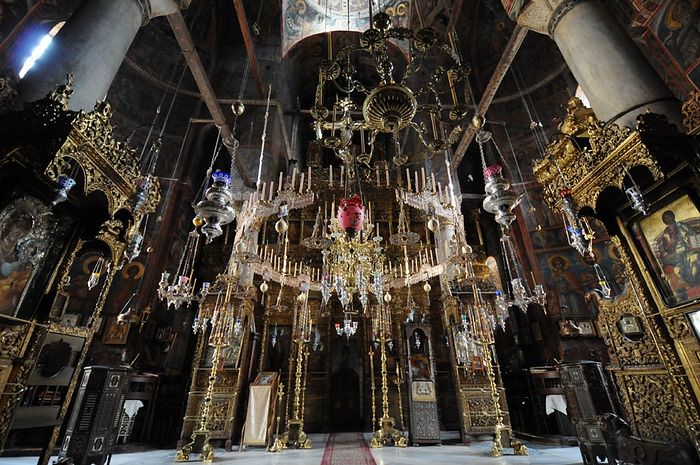 The Greek state has left Mt. Athos to the mercy of fate, whereby the tallest church of the monastic republic, the Cathedral of the Bodiless Powers of Dochariou, has fallen into desolation and would not survive an earthquake, which happen quite often on the peninsula, believes Archimandrite Gregory (Zumis), abbot of Dochariou Monastery.

“Greek has still not understood that it inherited two great monuments after liberation from Islamic tyranny: the Acropolis and Holy Mt. Athos. The state has left Athos to the mercy of fate … to this day the authorities have not attended to the question of preserving and restoring these monuments,” stated Abbot Gregory, as published on AgionOros.ru.

According to him, the state’s center for the preservation of the Athonite heritage has been left without funding for many years, its engineers retired long ago, and replacements have never been found.

The brethren of Dochariou have spent twenty-eight years trying to implement a plan for restoring their monastery’s cathedral, but this plan has been left dormant because of the preservation center’s inactivity. “Who should we resort to? Who can we turn to? Who shall we tell that twenty-eight years of research have gone to waste?” the archimandrite asks.

In studying the church, specialists have stressed repeatedly that the earthquake is in such a poor condition that any earthquake would completely destroy it. “We would have restored the cathedral with our own hands, as we did everything else in the monastery around it, but we do not have the power for such a gigantic work. How can we restore such a huge and magnificent temple just on small sacrifices?” concluded the abbot.

The Greek monastery of Dochariou is the tenth in the hierarchy of the twenty Athonite monasteries, and one of the oldest. The first mention of it dates to the tenth century. It is currently home to about forty monks. The Cathedral of the Bodiless Powers is famous not only for its height, but also the unique frescoes. It is believed that the cathedral has the most complete cycle of frescoes on the Holy Mountain. Greece is a sinking ship in need of Christ: Abbot Gregory of Dochariou, Mt. Athos
Agionoros.ru has published extracts from a topical article from Abbot Archimandrite Gregory (Zumisa) of Mt. Athos’ Dochariou Monastery in which he recounts Greece’s glorious past, contrasting it with its lamentable present, and calls them to return to their former glory.