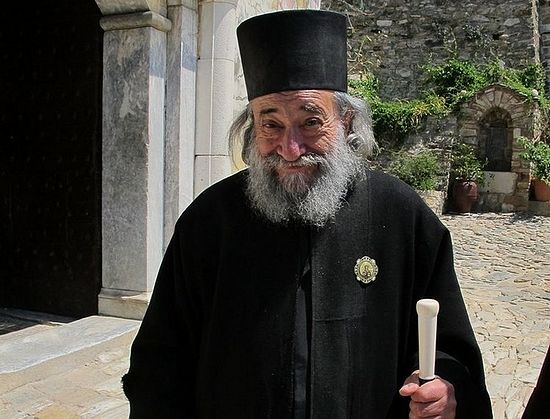 Agionoros.ru has published extracts from a topical article from Abbot Archimandrite Gregory (Zumis) of Mt. Athos’ Dochariou Monastery in which he recounts Greece’s glorious past, contrasting it with its lamentable present, and calls them to return to their former glory.

Coastal rock against which many centuries of waves have broken, but without moving it from its place… High mountain, showing mankind how to think and live; Hearth around which people gathered to enjoy the warmth; At your table all the nations drinking wine.”

He notes that Greek culture has long been an object of plunder, museums and houses throughout Europe being filled with the fruits of the Greek genius. “The antique period of the Orthodox Christian civilization of the Romans continued with the same mastery and efficiency. When civilized Europeans were still eating with their hands, our ancestors were carving iconostases and painting holy icons.”

“This ship of our fathers has undergone abuse and today is tilting. The hatred, envy, and ill-will of the demons has descended upon this beautiful vessel and today we already hear clearly the words of the captain from the bridge: ‘The ship is about to die. All those who can swim, jump into the water and swim away so as not to drown together with it.’”

But who, in Fr. Gregory’s view, is to blame for this current situation? “Let me tell you that we ourselves are to blame in this catastrophe, as we invited atheists and anti-Christian captains to guide our vessel. Our ancestors survived with a cross in their hands, and we bear it. When our children burn the Greek flag with impunity, under what flag will the ship ‘Greece’ move forward?”

The answer, the Athonite proclaims, is of course a strict adherence to Christ and His Orthodox Church: “We need Christ and Greece! Greeks should start a holy war and banish everyone who does the devil’s work in our bleeding country. It can no longer continue this way.”

If the nation should not turn back in force to the fullness of the Orthodox faith, Archimandrite Gregory sees destruction ahead: “Be watchful, do not sleep, because the end is near and it is not the end of the world, but the end of our Greece.” Metropolitan Chariton of Elassona: Church experiencing new drama and suffering new persecutions
The modern enemies of the Church who have deadly hatred for it declare that the Church, Christ and any religious belief in God should be necessarily excluded from peoples’ lives. Metropolitan Paul of Siatista: “The fall of Greece was planned”
According to the hierarch, “the Greek rulers for many years have been committing crimes against the motherland and the nation. Not only did they ruin the Greek economy, but they also corrupted the people in order to retain power and enjoy its fruits.”

Isidora1/24/2017 2:25 pm
With all respect to the elder, the banishments of evil should start with your Patriarch Bartholomew who carries on the scandalous atrocities of the Phanar over the past 100 years. These worldly sufferings are because the "Orthodox" proved incapable of spiritual suffering as their patriarch kissed the pope, concelebrated with him, "orthodox" priests kissing his ring and lightiing flames before him, participated in ceremonies that put the triune God on equal footing with pagan demons and protestant heresy. Through the abominable patriarchs, Greece has been at war with Orthodoxy for over a century. Guess who's losing.

Anthony1/23/2017 11:23 pm
Too late. Look at what the Motherland has been doing since the early 80's - slaughtering the unborn innocents through abortion. How many millions of Hellenic children are there that never were? Everyone became enlightened like European whitey. Suddenly whitey was our nation's ''family''. Forget what the krauts did to our grandparents in the second world war. Forget what the English were and still are doing to us in Cyprus. The history of the Hellenic nation began in 1981 and then again in 2004 when Greece/Cyprus joined the EEC/EU/Babylonian who re. All of a sudden the nation were European. And what a privilege to have whitey as our family - just look at our ''family'' today. They've enslaved us to be subservient debtors for life. Of course it's our politicians fault - but we voted them in. The fault therefore remains with us. The nation abandoned God for mammon. He abandoned us.
×