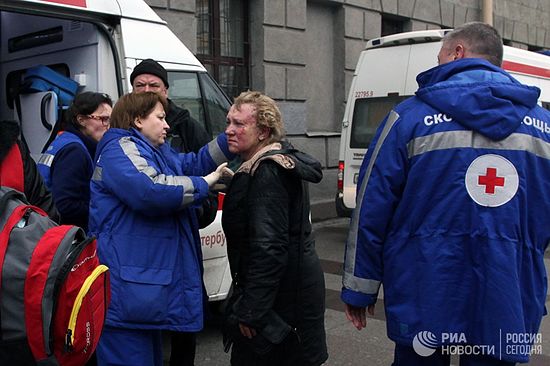 "Today, we can verify the death of fourteen people: eleven at the scene, three others dying in an agonizing condition: one of them during transportation in an ambulance and two others from life-threatening injuries in the reception area of Mariinsky Hospital,” she told reporters, including TASS.

Thirteen injured victims have been released from the hospital, while forty-nine remain under care. The blast injured three foreigners and visitors from seventeen Russian regions, according to the city's Governor Georgy Poltavchenko.

Reports immediately following the explosion indicated that there were two blasts, but it has now been established that one device went off at on the metro at about 2:20 PM on Monday as the train was moving from Technological Institute Station to Sennaya Square Station. The Russian Investigative Committee has qualified the blast as a terrorist attack, but is still investigating other options.

Preliminary reports suggest that the blast was caused by a suicide bomber, who either had the device attached to his body or in his backpack. It is also possible that the device was set off by another passenger. The bomber has been identified, a source within law enforcement told TASS. “He is indeed a native of Central Asia and had ties with Syrian militants,” he stated.

A second similar device, containing around 200-300 grams of TNT, was found and defused at Vosstaniya Square Station.

Patriarch Kirill served a Pannikhida in the lower church of the Transfiguration in Christ the Savior Cathedral this morning for all the victims of the metro blast. “This terroristic act is a challenge not only to the authorities, not only to law enforcement and those tasked with monitoring the safety of our citizens, but this terroristic act is a challenge to all of us, to our people,” the patriarch stated before the service. “We must better comprehend the importance of preserving a peaceful life, and the independence of our country. We must be more aware of our common responsibility for the future of our people,” he continued.

The primate went on to stress that we must never flirt with the evil one, who only brings death. He then prayed that “this martyric end would open to the departed the gates of the Kingdom of Heaven.”

His Beatitude Metropolitan Tikhon (OCA) sent a letter of condolence to His Holiness Patriarch Kirill on Monday, saying, “With a great sadness which has become all too familiar, we express our condolences and prayers for everyone affected by today’s bombing in St Petersburg… The suffering, pain, fear and anxiety of these events are only bearable through the love offered within the community of faith as we ‘look for the resurrection of the dead and the life of the world to come.’ Your Holiness, please be assured that the bishops, monastics, clergy and faithful of the Orthodox Church in America are offering prayers for the souls of those departed and for all those affected by this tragedy.”