Archimandrite Cleopa (Ilie: 1912-1998) is widely known as an elder, a great confessor of Romanian monks and a spiritual father to thousands of laypeople who flocked to him, seeking spiritual help. Below is an extract from his book, Value of the Soul, which was published in Russian by the publishing house of Moscow Sretensky Monastery. 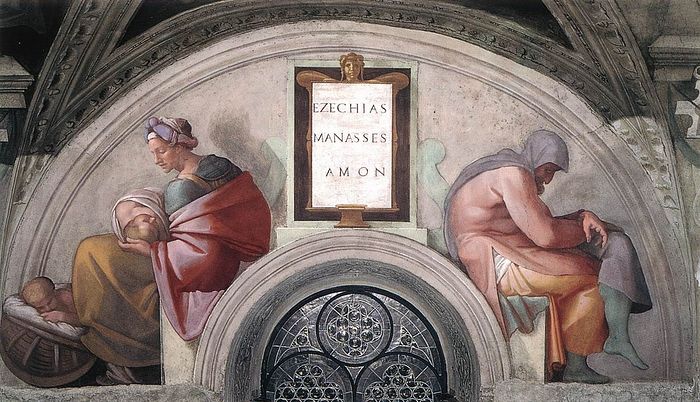 Manasseh, King of Judah in the Old Testament, committed perhaps more sins against God than anybody else. Over fifty-two years he forced his people to worship idols and demons, ordering the Jews to abandon their faith in true God. So Manasseh apostatized himself together with his children and the whole family. More than that, the king brutally subjected to torture and put to death all those who refused to worship idols and offer sacrifices to demons.

This king committed so many sins that it is even beyond expression. But the Most Holy God, wishing to demonstrate the depth of His mercy and the boundless compassion towards people, in His providence led Manasseh to repentance. How did it come to pass?

Although this king was very bad, he was descended from a good family. His father, King Hezekiah, who was a contemporary of the Holy Prophet Isaiah, pleased the Lord (see 2 Kings 18:20). I believe it was King Hezekiah that interceded to the Almighty for his son who had drifted away from the Creator of heaven and earth. So how did God convert Manasseh?

This is how the story goes. Seeing Manasseh’s spite and unbelief, coupled with the aberration of his mind (for not only was he an apostate himself, but he even plunged his people into perdition, forcing them to deny God), the Almighty, Who knows how to lead every single person to repentance, put a bridle on him and tightened the reins, as is said in the Psalter: whose mouth must be held in with bit and bridle, lest they come near unto thee (Ps. 32:9).

This is precisely what happened to this king. For if God had left him alone, Manasseh would have never repented himself. But wherefore the Lord brought upon them the captains of the host of the king of Assyria, which took Manasseh among the thorns, and bound him with fetters, and carried him to Babylon (see 2 Chron. 33:11). So they tied him up and threw into a tiny cage where he even could not straighten up. His head was shackled to his feet with two bronze chains. He was thrown into that cage where he could not even slightly raise his head, lying motionless all the time, coiled up.

The king of Assyria thought that Manasseh would live one week at most, so he gave him only bran bread and water to eat twice a week. And the king of Babylon repeatedly asked his servants: “Hasn’t King Manasseh died?” “No, Your Majesty. He is still alive and stirring in his cage,” he was answered. “It’s a surprise!”

So the king of Judah, bound with chains, lived in that cage not for a week or a month, not even for ten months, but for over seven years. And it was an eerie miracle—seeing a man with his head shackled to his feet, giving him a tiny amount of water and bran bread two times a week… But he still was alive.

This king was nothing but skin and bones following all these torments, suffering, and tribulations that he had to endure in that bitter sorrow; but God did preserve the spark of life in him. Can you imagine what he went through there? And it was then that Manasseh remembered God and said to himself: “God has inflicted these torments and punishments upon me because I provoked His wrath—I had turned away from Him and compelled my people to make sacrifices to idols!”

And he thought in his heart: “If God has preserved my life up to this day, then what does He want from me? He surely wants my salvation!”

And then he cried out from the bottom of his soul, shedding tears and fervently praying to God: “Lord, the God of Abraham, Isaac, and Jacob, God of heaven and earth! Lord, since You have done great things for me, not letting me die, prolonging my torments in these awful chains, and not cutting the thread of my life short, You are clearly waiting for me to turn to You.

“O Lord my God, I am unable to kneel down, to prostrate myself, to pray to You because I am bound unto great pain with these chains of iron and bronze, which have coiled me up like a ring, head to toe.

“I cannot make prostrations, cannot crumble to dust because I have been chained. But I implore Thee, O Lord my God, and bend the knee of my heart: remember, Lord, that if You show mercy to the righteous, it is nothing marvelous. For You have appointed repentance not for Abraham, Isaac, Jacob and their righteous offspring, but for the sinners.

“Therefore, O Lord my God, if You grant me mercy, if You look at my heart and lead me to repentance, if You forgive me all my transgressions, for my sins are more in number than the sand of the sea, then You will manifest Your incomprehensible mercy and Your inconceivable goodness in me.”

And when he was thus praying from the bottom of his heart, shedding streams of tears in his great sorrows and agony, the Most Holy God remembered him and put the thought into the Assyrian king’s mind to remove the chains and to release Manasseh from the cage, from that terrible prison.

And when Manasseh was freed, he began to turn and roll over like a wheel as he had been chained for so long. His bones had become rounded so he could not straighten up. Imagine, how pitiful it was to see this poor man: coiled up like a bag of bones! How pitiful!

And the pagans of Babylon began to weep, saying, “It’s a wonder this man is alive at all! And is this creature really a man?”

Then the people gave him freedom and began to feed him a little, to take care of him, and several months later he regained his health. And as soon as Manasseh recovered and could stand erect, the king of Babylon said: “The God Whom he worships has forgiven him for his true sincere repentance!” So the king of Assyria let Manasseh go back to Jerusalem and rule as king again.

So King Manasseh regained his power and led the whole nation to the veneration of the True God of Israel, performing numerous good works until the end of his life. And, most importantly, he composed that wonderful prayer which is read during the Great Compline service.1

Have you seen the wisdom of God? Have you heard what God has done? He has turned a pagan king, whose sins were more in number than the stars in the sky and the sand of the sea, into a holy king because he repented from the bottom of his soul, shed bitter tears and suffered for so many years in extreme fasting, torments and pain! But nevertheless he did not lose hope in the mercy of God!

1 In the Holy Scriptures the Prayer of King Manasseh can be found at the end of the Second Book of Chronicles. Great Compline is served on Monday, Tuesday, Wednesday, and Thursday evenings of Great Lent.
See also How to Overcome Your Sins and Passions?
A Lenten Interview with the Primate of the Ukrainian Orthodox Church On the Fear of God
Repentance is the ship, and fear is its rudder, while love is its divine harbor Avoiding Repentance
Orthodox Christian Prison Ministry
During the Lenten season we implore God to help us stop rationalizing and gilding our sins, claiming we do God’s will when we do not. In God’s eyes, disobedience equals occult divination. Let us never believe that we may disobey God and escape all consequences!
Comments

It is a treasure to behold about Manasseh...
God bless you!
Regina