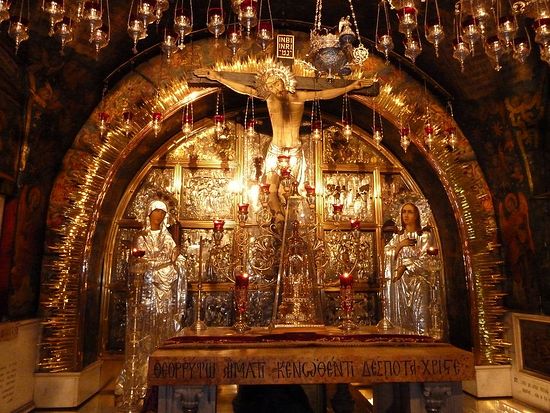 On April 7, we reported on a supposed miracle that took place about a week earlier, on March 29, at the Church of the Holy Sepulchre in Jerusalem. Several posts appeared on Facebook, on various blogs, and on YouTube the next day, reporting that the eyes on the crucifix icon over the altar at Golgotha, the historic site of the Lord’s Crucifixion, had opened and remained that way for at least a day, whereas previously they had always been closed.

As Fr. Theodore Daoud writes, “The miraculous event occurred this past Wednesday before the eyes of many priests and visitors, including my friend Archimandrite Malateus [sic] Basal whose friend took the pictures, who assured me of what happened in detail, which is that the eyes of the crucified Christ on the icon—which are always closed—remained open throughout the day.”

Archimandrite Milatios himself posted the pictures early the next day, on March 30, on his Facebook page, writing, “Wondrous art Thou, O Lord, in Thy saints. The cross of Golgotha opened its eyes. This is the first time this has happened. The Crucified Lord on Golgotha always has His eyes closed, but today for some reason, He miraculously opened His eyes.”

Since posting the original article, we have received many comments and feedback about it, some assuring us that the miracle has been confirmed by contacts in Jerusalem, and others saying it has been denied by the Holy Sepulchre.

Thus, while we know that innumerable miracles have occurred in the Holy Land, the place where the Lord Himself lived and walked, and died and rose again, accomplishing our salvation, and we do not doubt that God will continue to bless His Church with miracles, we can neither confirm nor deny this particular story.

Either way, let us remember Fr. Theodore’s words on the matter: “Miracles allowed by God’s Love strengthen our weak faith, but they are not the reason for our faith. Our faith goes deeper than that. We have seen God in the flesh, we have heard Him, we have eaten with Him, and we witnessed His Crucifixion, His Death, His Resurrection and His Ascension to Heaven. The greatest miracle which is far underappreciated occurs in every Divine Liturgy, where bread and wine are transformed to the Body and Blood of Christ. Let us always be mindful of this.” Miracle with crucifix occurs at Golgotha in Church of Holy Sepulchre

Miracle with crucifix occurs at Golgotha in Church of Holy Sepulchre
A miraculous event has reportedly taken place recently within the Church of the Holy Sepulchre in the Holy City of Jerusalem. Golgotha, the place of the Lord’s Crucifixion is also within the church, over which stands an altar. Under the altar, pilgrims can venerate the exact place where the Lord’s Cross was placed in the ground, and above the altar hangs a crucifix, on which hangs the crucified Lord with eyes closed. Ancient Witnesses on the Church of the Holy Sepulchre
The church of the Holy Sepulchre in Jerusalem could be said to be the main church of holy Orthodox. The building includes both Golgotha where our Lord was crucified, and His holy grave, or sepulchre, where He rose again from the dead for the salvation of the world. As such, countless millions of pilgrims have traveled to the Holy Land to venerate the sites in this holy church, since its founding in 326 by the order of Emperor St. Constantine the Great, which is celebrated by the Orthodox Church every year on September 13/26.
Comments

We found out there were conflicting stories about it only after publishing the original article.

What person can limit the work of God?

Do they also disbelieve that holy myrrh is gushing from many icons all over the world?