Miracle with crucifix occurs at Golgotha in Church of Holy Sepulchre 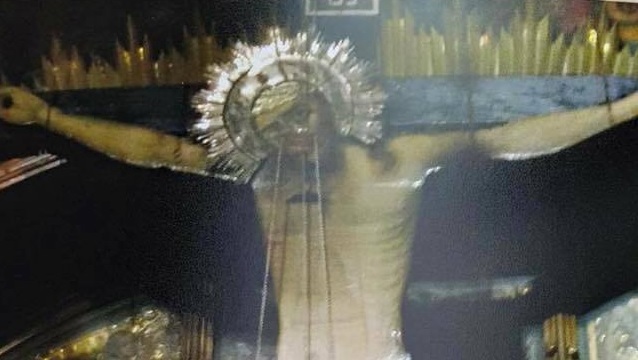 A miraculous event has reportedly taken place recently within the Church of the Holy Sepulchre in the Holy City of Jerusalem. Golgotha, the place of the Lord’s Crucifixion is also within the church, over which stands an altar. Under the altar, pilgrims can venerate the exact place where the Lord’s Cross was placed in the ground, and above the altar hangs a crucifix, on which hangs the crucified Lord with eyes closed.

He writes on his Facebook page, on April 1, “The miraculous event occurred this past Wednesday before the eyes of many priests and visitors, including my friend Archimandrite Malateus Basal whose friend took the pictures, who assured me of what happened in detail, which is that the eyes of the crucified Christ on the icon—which are always closed—remained open throughout the day.” 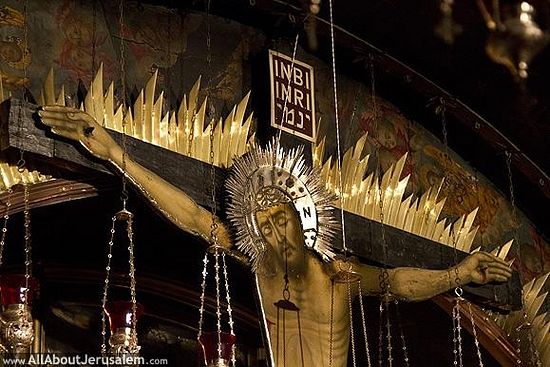 Fr. Theodore also adds some words that call us to focus on the heart of our faith: “Miracles allowed by God’s Love strengthen our weak faith, but they are not the reason for our faith. Our faith goes deeper than that. We have seen God in the flesh, we have heard Him, we have eaten with Him, and we witnessed His Crucifixion, His Death, His Resurrection and His Ascension to Heaven. The greatest miracle which is far underappreciated occurs in every Divine Liturgy, where bread and wine are transformed to the Body and Blood of Christ. Let us always be mindful of this.”

In closing, Fr. Theodore writes, “We look at this miracle and all miracles as a sign from God to strengthen our faith and to remember the Divine Love of the One who died on the cross for our sins. May we repent and prepare ourselves for a true Holy Week and Resurrection. Praise God for all things.”

This miracle occurs just a week after work on the edicule over the Lord’s tomb was finished, and two weeks before the great miracle of the Holy Fire, celebrated in the Church of the Holy Sepulchre annually on Holy Saturday. “The Miraculous Icon of Our Lady of Sitka” Lecture
Fr. John Kowalczyk Ancient Witnesses on the Church of the Holy Sepulchre
The church of the Holy Sepulchre in Jerusalem could be said to be the main church of holy Orthodox. The building includes both Golgotha where our Lord was crucified, and His holy grave, or sepulchre, where He rose again from the dead for the salvation of the world. As such, countless millions of pilgrims have traveled to the Holy Land to venerate the sites in this holy church, since its founding in 326 by the order of Emperor St. Constantine the Great, which is celebrated by the Orthodox Church every year on September 13/26.
Comments

Hayley7/11/2017 2:15 am
This priest is no longer a priest as another commenter noted. This is one of his tools used to attract attention to himself. Be careful.

Elizabeth Davis4/11/2017 12:00 am
The author of this blog, though he presents himself as a priest, no longer is one. And there does not seem to be any other corroboration that this event actually happened. I hate to say it, but now I am skeptical, unless more people who were actually there (he was not) corroborate.

MJ4/8/2017 7:26 pm
Maybe by this miraculous sign the Lord wishes to emphasize His presence with His Body, the Church, at this particular time of salvation history, and that He walks with the Church through His Passion, as if for the first time, i.e., He wishes to draw His Church into His one time Passion, Death . . . and Resurrection. Perhaps the Lord in this wishes to encourage the faithful. He signs the authentic witness of His faithful -
those who will be put to the test of witness in these times - with this miracle of His explicit active presence, and also assures them of the victory to come in Him. The authentic Church of the faithful will utter with His voice Christ's own words from the Cross, with the power of all that they have accomplished, and will be drawn then too into the triumph of the empty tomb. Praise Him!


Praise be Our Lord. Jesus Christ.

Shirley Noonan4/8/2017 5:21 pm
We praise You and we thank You oh Lord,for by Your holy cross You have redeemed the world!

"Therefore, after many prayers, reections, and thoughts about your persistent disobedience, you leave us with no choice except to return you to the rank of the laity (i.e. you are laicized) effective immediately. We pray that you will be close to God and His Church, as you continue your life as a layperson in prayer and repentance."