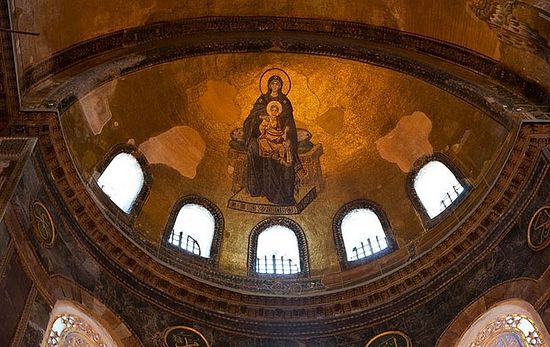 President Erdoğan of Turkey has announced that he will read Muslim prayers in Agia Sophia in Constantinople on April 14, Holy Friday, one of the holiest days of the year for the Christian faith—a move that has provoked the Greek and broader Orthodox world.

Furthermore, he has claimed that Kemal Ataturk’s order to transform Agia Sophia from a mosque into a museum is a fake, reports AgionOros.ru.

The Agia Sophia (“Holy Wisdom) church is one of the greatest and most important churches for Orthodox Christians, serving as the seat of the Patriarch of Constantinople from the time of its construction in 537 by Emperor St. Justinian, until the fall of the Byzantine Empire in 1453. Under the Ottomans it was converted into a mosque until 1931, being secularized and opened as a museum on February 1, 1935. The church is considered the apex of Byzantine architecture, and is home to many of the most famous mosaics in Christendom.

Erdoğan is not the first to claim that the order to turn the building into a museum is a fake. Turkish historian and author Mustafa Armaga has also claimed that Ataturk’s signature under the act is a forgery, claiming the mosque became a museum due to “American machinations,” with American diplomats putting pressure on Turkish authorities.

“Turkish President Recep Tayyip Erdoğan will hold Muslim prayer on Friday, the eve of April 16, in Agia Sophia, together with all the government and leading officials,” stated a source within the Turkish government. The source also told Turkish media that the prayers “will be a performance against the Crusades,” and a symbolic act of transforming the museum back into a mosque.

Metropolitan Anthimos of Thessaloniki commented on the news in his Sunday homily, saying, “A difficult situation unfolds today in the international sphere. Threats, fear, insecurity… Our neighbors from Turkey are threatening Agia Sophia, and threatening to seize Greek territory up to the city of Kavala. We cannot remain indifferent in such a situation. Let us unite to secure our homeland.” Athens Virtual Reality Theater Presents Hagia Sophia History
The presentation explores the challenges faced by the architects in carrying out their ground-breaking and ambitious construction, the problems they had to overcome, and also shines light on the intricate decorations of the interior.

What Ever Happened to the Holy Altar of Hagia Sophia After 1453?
According to legend, after the fall of Constantinople to the Ottomans in 1453, three Venetian ships fled the city filled with various relics to avoid their capture by the Turks, but the third which carried the Holy Altar of Hagia Sophia, sank into the waters of the Bosphorus in the Marmara region. Since then, in the exact area of the sinking, the sea is always calm and serene, no matter what weather conditions are prevailing in the area. This phenomenon is testified by modern Turkish scientists, who have attempted at various times to discover the cause of this strange phenomenon, but due to the muddy composition of the seabed, their efforts have been fruitless.
Comments

Polly Rose4/13/2017 1:20 am
This is a total disgrace... I can't believe we're building a mosque for them in Athens, while they dishonor one of the greatest churches of Orthodoxy... shame...

Nick4/11/2017 2:23 am
If I am not mistaken Kemal Atartuk was alive when Agia Sophia become a Museum! So how can now claim was a fake document!! Twisted minds!! Any excuse to start a war but be assured to their demise!!

Anthony4/10/2017 7:41 pm
Is this the same ecumenist Anthimos who excommunicated the anti ecumenist blessed Pater Theodoros Zisis? How absolutely galling. Maybe to solve the problem with the turks, the pseudo Orthodox such as the above should learn to respect God's Body, the Orthodox Church by not inflicting divisions and heresies such as Ecumenism upon Her. Anyway what the turks do is becoming increasingly irrelevant. As St Paisios prophesied -"The Turks... let them be. They have koliva (memorial wheat) in their belt. Events will start that will culminate with us taking back Constantinople. Constantinople will be given to us. There will be war between Russia and Turkey. In the beginning the Turks will believe they are winning, but this will lead to their destruction. The Russians, eventually, will win and take over Constantinople. After that it will be ours. They will be forced to give it to us. (The Turks) will be destroyed. They will be eradicated because they are a nation that was built without God’s blessing. One third of the Turks will go back to Kochina Millia. One third will be saved because they will become Christians, and the other third will be killed in this war.”
×